The Chinese Communist Party’s removal from its constitution of limits to Presidential terms back in 2018 tightened Xi Jinping’s grip on power. His drives to enforce party and public discipline on the domestic front and reassert his country’s position on the world stage have both continued at full speed. A military spat with India in the Himalayas, frequent naval exercises near the Taiwan Strait and ongoing trade tensions with both USA and Australia mean that China’s foreign policy was as assertive as ever, and while the imposition of a new security law inflamed both local and global opinion, the jailing of pro-democracy protester Joshua Wong showed that Beijing was unlikely to deflect from its core aims in in Hong Kong.

Thailand is still led by a military junta, six years after 2014’s coup, although local elections in December 2020 offer the prospect of a return to democracy at some stage. Meanwhile Prime Minister Narendra Modi continues to dominate the political scene in India, with an election not due until 2024 and construction of a new Parliament building in New Delhi underway. The edifice itself is one symbol of Mr Modi’s intent, but the increased number of representatives in both Lok Sabha and Rajya Sabha seems tilted toward the north of the country – where the ruling Prime Minister’s Bharatiya Janata Party is so much stronger.

Elsewhere, Jacinda Ardern’s victory over the National Party’s Judith ‘Crusher’ Collins won Labour re-election and the first parliamentary majority for either side since 1996, thanks to the Prime Minister’s handling of both 2019’s Christchurch shootings, 2020’s pandemic and her programme that focused on renewable energy, racial diversity and increased taxes on the wealthiest.

Scheduled polls for 2021 are few and far between in the region, with Hong Kong’s Legislative Council election in September the one to watch. Postponed by a year owing to covid-19, the ballot will be a key test for both the Pro-Beijing Alliance and momentum generated by the pro-democracy movement.

Otherwise, the biggest political event in the region may be the World Economic Forum, whose ‘Build Back Better’ slogan appears to form the basis of its ‘Great Reset’ platform. This meeting of the great and the good has been moved from Switzerland in January to Singapore in May.

The covid-19 virus reportedly had its origins in Wuhan, China and the region was thus first into the pandemic and the first out of it, although Hong Kong, South Korea and Australia have had to confront second- and third-round clusters, despite the widespread perception that they dealt with the challenge head on in a swift and effective fashion.

As in the West, governments and central banks responded with fiscal and monetary support for their respective economies. China, South Korea, Singapore, Taiwan and New Zealand, to name just five, all unveiled new Government spending programmes while Australia, Malaysia, New Zealand, Indonesia and Vietnam were among those to cut interest rates. The Reserve Bank of Australia and the Reserve Bank of New Zealand also initiated Quantitative Easing (QE) schemes for the first time to also try and put a lid on borrowing costs and keep credit flowing to where it was needed most.

The trend in interest rates across Asia was, as elsewhere, resolutely lower 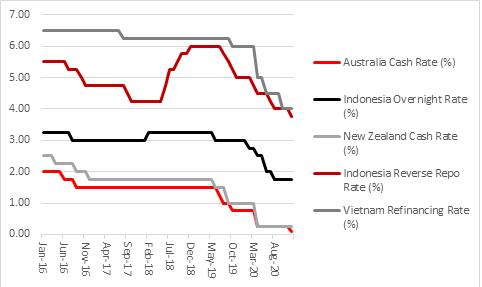 Despite such efforts, the after-effects of the pandemic could easily linger through 2021, although there are some hopeful signs. While not everyone may take the numbers completely at face value, the official statistics suggest that China is bouncing back. Even if the Middle Kingdom was forced to scrap its GDP growth target for the first time since 1990, China has begun to show some traction. The country avoided a recession and has already grown for two straight quarters.

China’s economy looks to be bouncing back 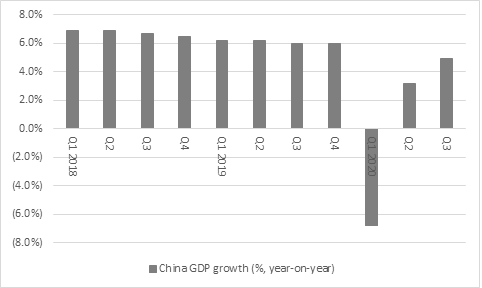 Indicators such as retail sales, industrial production and tangible fixed asset investment suggest there should be more to come, although President Xi’s rumoured intervention to delay the initial public offering of Ant Financial suggests that Beijing is still finding it hard to juggle free market economics with central control and indebted SOEs with a desire to offer fiscal support to the economy and managing its currency with loosening monetary policy as and when it wants to do so.

The renminbi wobbled badly during the early stages of the year, as it stumbled to RMB 7.17 to the dollar, very near to its 2008 trough, but rallied as China began to recapture some economic momentum and America, by contrast, saw its recovery slow as its efforts to contain the virus faltered in late 2020. While this could be as much a case of dollar weakness as renminbi strength, it may take a little pressure of Beijing as it looks to maintain the economic momentum which ultimately provides the Communist Party with its legitimacy with its public.

China’s currency has had a volatile year 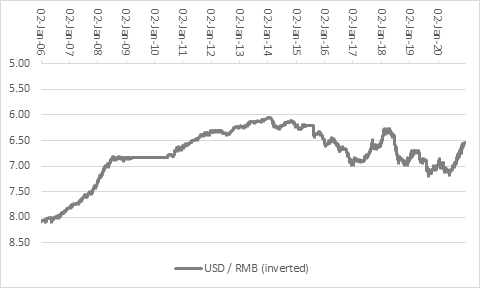 As with many of the major geographic regions, there appeared to be a disconnect between what was happening in the ‘real’ world and the ‘financial’ world – Asia-Pacific (excluding Japan) stocks hit a new lifetime high in late 2020, buoyed by new all-time highs for benchmark stock indices in India and Malaysia and a strong showing from China, where the headline CSI 300 indicator rose by more than a fifth to its highest mark since 2015 and the technology-laden ChiNext surged 43%. The latter was actually helped by American economic sanctions, as investors snapped up local technology specialists in the view they would need to fill the void and provide the supply now denied them by President Trump’s trade manoeuvres as he tried to close the US trade deficit and tackle the vexed issue of intellectual property misuse.

Chinese equities roared higher in 2020, despite the pandemic 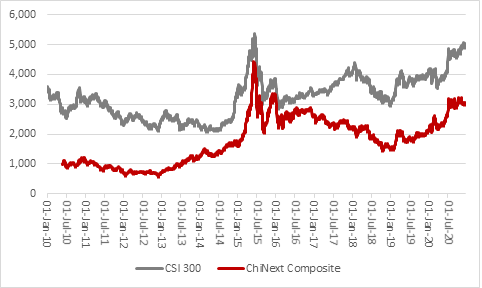 A rebound in the Aussie market was fuelled by a similar comeback in commodity prices, notably iron ore, despite a Chinese ban on coal produced Down Under, as well as agricultural crops. Even a major cyber-attack could not dampen enthusiasm in New Zealand where the NZ-50 index set a series of all-time peaks, helped by the limited reach of the pandemic and equally limited damage done to the local economy, as well as interest rate cut and QE. 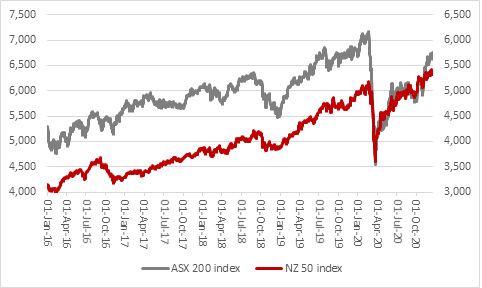 As a result, Asian markets had started to look and feel well and truly bullish, despite the occasional (big) blip, such as the Luckin Coffee fraud which saw the US-traded Chinese company fined by the Securities and Exchange Commission and delisted; ten defaults among Chinese SOEs, notably Yongcheng Coal and Electricity; and the intriguing decision by certain Hong Kong entrepreneurs to take their companies private, notably Li & Fung, Hopewell and Wheelock. The final trend raised the nagging question of whether Hong Kong would again ever be seen as a truly safe port of call for entrepreneurs and capital.

To counter these cross-currents, bulls of Asian markets will point to record dollar-denominated bond sales, for an average yield of 3.5% compared to a five-year average of 4.2% according to Bloomberg; record-high equity issuance in India; a bumper year for new listings in South Korea; and China cracking the $10 trillion market capitalisation barrier for the first time in five years.

These developments, coupled with the cheap liquidity provided by interest rate cuts and monetary stimulus, helped to stoke a feel-good factor which would have seemed inconceivable in the dark days of January, February and March. Overall, Asia-Pacific was the second-best performing region out of eight, in total-return, sterling terms in 2020 as it trailed only Japan.

Asia ranked third out of eight regions in 2020 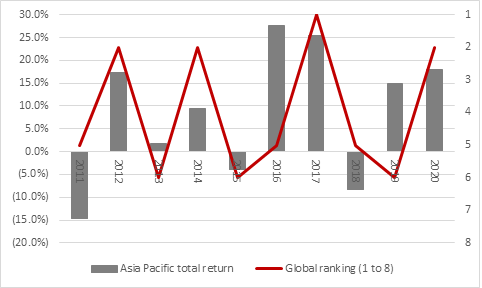 The region performed consistently strongly through the year as it ranked third during the second half, when optimism was rising that 2021 would be a more normal year, thanks to what looked like successful containment of the virus in several countries across the region, as well as the development of vaccines in the US, UK, China and possibly Russia.

Asia was relatively strong throughout the year. It ranked third in the second half, behind only Latin America and the Africa/Middle East region, as risk appetite returned and investors’ confidence grew. 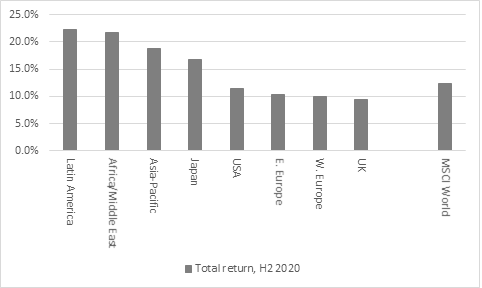 It will be interesting to see if Asia can keep it up in 2021 as and when global economic activity and risk appetite pick up again – it has enough prime exporters and companies who would be plugged into an upturn, be they silicon chip makers, shipping firms, car and steel makers or electronics manufacturers.

Perhaps its outperformance reflects nothing more than a view that the region was first in and first out when it comes to the viral outbreak. Perhaps it is due to the region’s much lower reliance on commodity prices, relative to Eastern Europe (where Russia dominates) and Latin America (where Brazil’s fortunes exercise great influence). Asia may have also received a boost from the weaker dollar, especially given 2020’s surge in dollar-priced debt issuance.

But, given the experience of SARS in 2002-03, Asia may have been better prepared and equipped to deal with the challenge posed by covid-19. It may be that such readiness could serve the region – and investors in it – well over the longer term, too.