It was doubtless a frustrating way to go, but politics has always been that way. One short year ago, Shinzō Abe was looking forward to hosting the Tokyo Olympics in July 2020, perhaps the crowning moment of his career, having just become Japan’s longest-serving, modern-day Prime Minister (PM). The Olympics were postponed and Abe had to step down in September owing to ill-health, just as his third term as leader of the Liberal Democratic Party (LDP) was drawing to a close.

Source: Asahi Shimbun, Nikkei Newspaper. *Dates span all periods in office which may not have been consecutive

Mr Abe’s right-hand man, and LDP stalwart Yoshihide Suga, won autumn’s party leadership poll – and thus the job of PM – by a landslide but he inherited a difficult legacy, even allowing for his predecessor’s array of equally crushing general election victories in 2012, 2014 and 2017. The Abe administration’s popularity had begun to slide amid public perception that it had handled the covid-19 outbreak poorly, a plan to revoke the pacifist Article 9 of the constitution had run into the sand and October 2019’s increase in consumption tax to 10% from 8% had done what so many had feared by dragging Japan back into recession – even before the pandemic hit home.

Mr Suga must act quickly because he must fight a general election by October 2021 at the latest, although he and the LDP are basking in a bounce in opinion polls. Even a merger between the opposition Constitutional Democratic Party and the Democratic Party of the People did not stop his approval ratings quickly reaching 63% after Mr Suga launched a third fiscal stimulus package of the year, to fight the pandemic but also press ahead with his twin drive to improve Japan’s digital skills and enhance its use of alternative and renewable energy sources.

Another wave of the pandemic scuppered thoughts of a January snap poll and that lofty approval score has begun to wane, thanks to his determination to host the Olympics in 2021 and a poorly received campaign to boost tourism called Go To Travel. Some are even suggesting that Mr Suga already needs to watch his back, as he has to fight a party leadership poll as well, with one-time Defence Minister Tarō Kōno, former Foreign Minister Fumio Kishida and Mr Abe’s long-time sparring partner Shigeru Ishiba all thought to be jockeying for position, with the job of Prime Minister and prospect of overseeing the preparations for the 2025 Expo in Osaka also in play.

Japan’s economy grew for the first time in four quarters when output rose 5.3% from Q2 to Q3, but it still shrank on a year-on-year basis for the fourth time in a row. Even allowing for the ambitious ‘Abenomics’ programme of his predecessor, which launched the ‘Three Arrows’ of fiscal stimulus, monetary stimulus and wide-ranging social and economic reforms, economic progress had been nothing but patchy before the Consumption Tax caused Japan to stumble, just before the virus swept in to knock it right over. 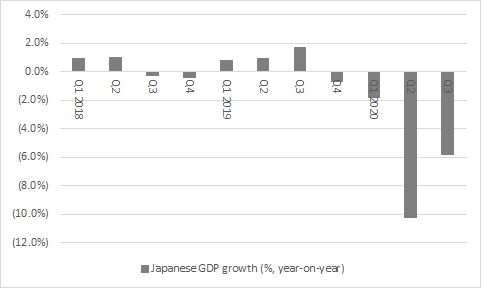 Here lies a bit of a conundrum for both Mr Suga and those investors who have exposure to Japanese equities. Abenomics may have boosted the country’s stock and bond markets but it ultimately failed in its overall economic goals. The plan was to boost economic growth and drive inflation toward the Bank of Japan’s 2% target but the programme’s success rate here is mixed, given the latest recession and headline inflation figure was minus 0.9%, to suggest that deflation had again begun to take a hold.

Abenomics failed to deliver inflation or ultimately escape from deflation 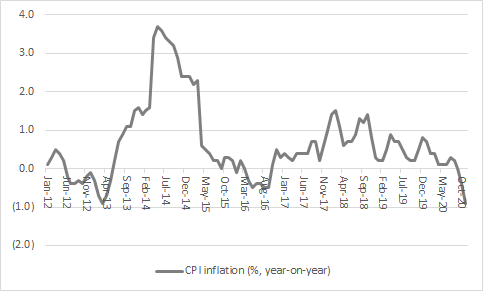 In addition, the Bank of Japan’s enormous QE scheme is seen by some as doing little more than distorting financial markets. In response to the pandemic, the monetary authority scrapped the cap on the amount of Government bonds that it was able to buy and ramped up its purchases of stocks via exchange-traded funds (ETFs). The central bank’s ¥705 trillion ($6.8 trillion) in assets represent around 125% of GDP and leave it holding some three-quarters of all Japanese exchange-traded funds (ETFs), more than half of the Japanese Government Bond (JGB) market and some 10% of the stock market, according to some estimates.

The Bank of Japan is reviewing its ultra-loose monetary policy 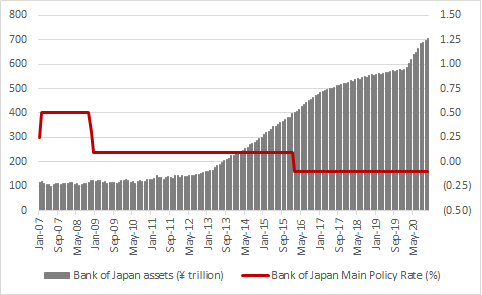 This begs the question of when the buying has to stop or what will happen when it does. No-one knows the answers to that, not even BoJ Governor Haruhiko Kuroda, who, in December, announced a root-and-branch review of monetary policy. In the end, decades of zero-interest rate (ZIRP) and negative-interest-rate (NIRP) policies and Quantitative Easing (QE) have not generated the growth or inflation that the BoJ craved, despite renewed asset price inflation, judging by how the stock market has finally started to romp higher. Central bankers in the West appear unwilling or unable to take heed of these failures and doubtless will be awaiting the results of Mr Kuroda’s policy review with considerable interest, although there has to be a chance he decides too little monetary medicine is the problem at hand, not too much.

The bear case against Japan has long been that is a debt-riddled basket case, following the bursting of the debt-fuelled property and stock market bubble that peaked on 31 December 1989, with terrible demographics for good measure. The economy has rarely gained sustained traction since and the Nikkei 225 still trades some 30% below its all-time high, despite 25 years or more of QE and zero or negative interest rates.

However, the Nikkei did reach a 29-year high in 2020, to provide some riposte to what bulls see as the same tired and arguments. After all, concerns about debt and demographic are neither new nor unique to Japan. As the US, UK and Europe all slip into the public debt mire, there may be less chance of the markets picking a fight with Japan’s bond market or currency. Nor have these issues stopped the Nikkei advancing from a modern day low of barely 7,600 in 2003 to nearly 27,000, regardless of the latest recession and the pandemic. Ultra-loose monetary policy from the Bank of Japan is helping here, as investors look for returns better than those available from cash or JGBs, and the BoJ seems unlikely to throttle back any time soon, either, following its policy review. 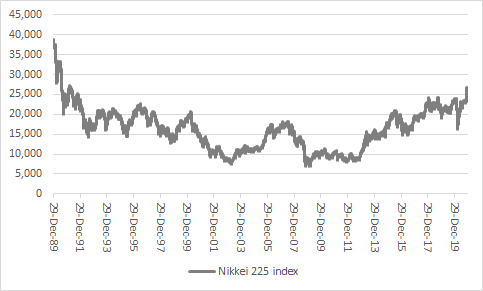 As a result of that, geographic regions in 2020, in sterling-denominated, total-return terms: 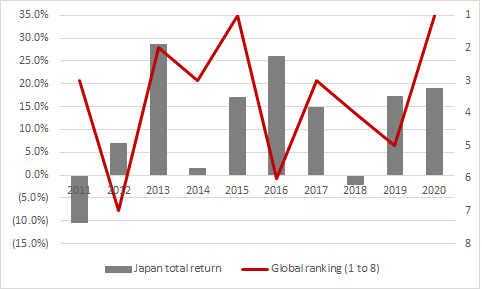 This may be because the starting point was propitious – after its multi-decade swoon, the bear cases may have been at least partly factored into valuations. In addition, the Abenomics programme actively promoted corporate governance reforms and even prompted the creation of a new stock index, the JPX Nikkei 400, where return on equity, dividend and buyback policies and shareholder relations were key entry criteria. Before the pandemic, Japan was trading on a lowly price/earnings ratio (PE) relative to its history, thanks to Abenomics’ focus on profitability, and the latest spike in the PE simply reflects the hit to corporate earnings from the pandemic-related global recession. 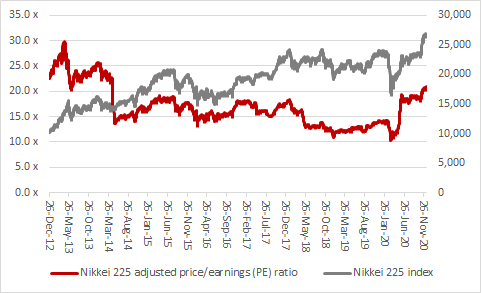 Japan may also have something else going for it. The Japanese equity market is packed with high-quality manufacturers and exporters, giving it leverage into whatever form of global upturn that follows the pandemic. Business confidence is understandably low given the current backdrop, using the quarterly Tankan – or the Business Short-Term Economic Sentiment Survey as a guide. But the 13-point improvement from Q3 to Q4 in 2020 outstripped anything seen during Mr Abe’s premiership and if optimism about vaccines and a global economic upturn persists into 2021 then that could quickly feed through to share prices on the Tokyo exchange. Equally, an elongated downturn in Japan thanks to a global double-dip could just as easily have the opposite effect. 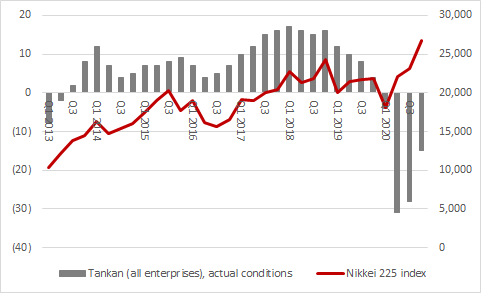