The FTSE 100 is back where it was in summer 2016, and still languishes below the peaks of 2007 and 1999, while the pound trades near five-year lows against the dollar and close to a ten-year trough against the euro. It is therefore deceptively easy for value-seeking contrarians to make a case for a UK stock market which has underperformed and feels unloved. This is particularly the case when merger and acquisition activity suggests that someone already thinks there is value to be had on these shores and the FTSE 100’s earnings mix means it is a good recovery play, in the event the covid vaccines do the business and global economic activity starts to pick up in 2021.

That said, there are more than enough variables to make second-guessing the markets even harder than usual. Enthusiasm for UK equities is still tempered to some degree by Brexit, simply owing to the uncertainty of how this will look come 1 January, although anything is probably better than the fog with which investors have to contend at the moment.

A persistent covid-19 virus and a double-dip recession are both major threats to any recovery scenario and some investors will fight shy of the FTSE 100 because of the weighty influence of both oil and banking stocks, either for ethical reasons (in the case of the oils) or excessive global debts (in the case of banks) or simply in the view that both industries are simply a busted flush, as technological developments condemn them to the dustbin of history.

Banks are indeed hemmed in on several fronts, notably record levels of global borrowing, the margin-crushing powers of central banks’ Quantitative Easing (QE) and Zero Interest Rate Policies (ZIRP) and the rise and rise of fintech rivals which could ultimately disintermediate the lenders as dissatisfied customers go elsewhere for their financial services (usually starting with their mobile phones).

They are cheap, trading at sizeable discounts to book, or net asset, value, and probably deserve to be. But even Japanese banks managed some huge rallies even during the thirty-year pasting they have received at the hands of Japan’s equity and property market collapse and then the Bank of Japan’s QE and ZIRP policies and if the markets sniff an economic recovery, any steepening of the yield curve in the UK or inflation, then the FTSE 100’s big five banks could have a (potentially rare) good year. 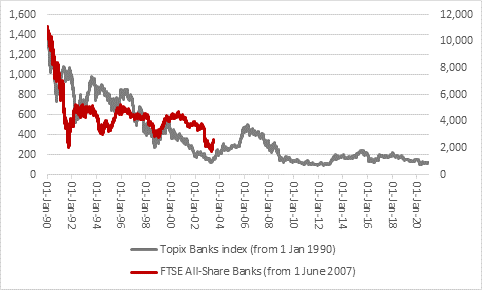 Oils may be beyond the pale for many investors, but the chances of the Earth weaning itself off the black stuff in the next five to ten year are pretty limited, so oil and gas fields may not quite prove to be the stranded assets that many think – at least, not yet anyway.

Under normal circumstances, oils would be primed for a run. Sentiment is dead set against them, they have performed badly, capex and exploration work are being cut and production is being reined in, even as demand could be set for a near-term rebound in 2021, should the vaccines do the business and global economic activity start to pick up.

Again, those investors who run strict ethical, social and governance (ESG) screens will not care less, but those who still argue that capital should be allocated where the risk-reward balance may be more tempting from a purely financial view may take a closer look.

Besides oils and financials, in the form of insurers and banks, the other big swing factor in 2021 earnings and dividend forecasts are the miners. This also shows how geared the FTSE 100 is into a global economic recovery and how its fortunes are likely to be determined by global events rather than domestic ones. With ultra-loose monetary policy and further fiscal stimulus both on the cards for 2021, this may not be the bad thing that it at first seems.

The UK market may be unloved, judging by how it has resolutely underperformed since the Brexit vote in June 2016 (and frankly before that).

But periods of poor performance can mean there is contrarian value to be had, especially with the weak pound an additional lure to overseas buyers. In the past couple of months,

The average premium offered has been 47% across the 15 takeovers announced on the Main Market and junior AIM platform of the London Stock Exchange since late October. If buyers feel they can still justify their purchase at that sort of premium, then they clearly think they are getting some kind of value, both financially and strategically.

The valuation you pay is the ultimate arbiter of any investment you make, whether you are a trade buyer, financial buyer (such as a private equity firm), institutional pension fund manager or a private investor, so the less you pay, the more downside protection you have and the more upside potential there may be.

FTSE 100 member RSA is one of the firms to have received an overseas bid but so have plenty of FTE 250 and small-cap firms, to imply there is value to be had beyond the confines of the FTSE 100’s multinationals, too, so investors looking to build a portfolio of UK firms could delve down into the FTSE 250 (or below) as well.