In his novel Pudd’nhead Wilson the American writer Mark Twain cautioned about October, saying: ‘This is one of the peculiarly dangerous months to speculate in stocks. The others are July, January, September, April, November, May, March, June, December, August and February.’ Yet even he might have to admit to December’s festive charms, as it is easily the best-performing month over time. Since its launch in 1984, the FTSE 100 index has gained 2.2% on average in December, whereas April is the only other month to offer an average advance of more than 1%.

If you want to know why markets talk about the Santa Rally, that’s why – because the numbers back it up. Tuesday’s near-2% gain on the first day of the month will only serve to fuel hopes for further seasonal cheer as a difficult year starts to draw to a close. 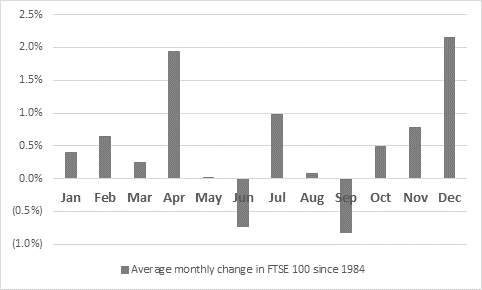 Quite why this phenomenon should occur is less clear.

Investors used to talk about ‘the January effect,’ as money managers put clients’ money to work and into the market in the New Year but since 2000 the FTSE 100 has only risen seven times in 20 attempts in January and has chalked up 13 losses, so that may be the end of that.

It is possible that the Santa Rally has developed because investors have looked to anticipate, the January effect, and price it in, or discount it. Anything is possible at a time when passive investing and algorithm-driven funds generate such strong flows, but another possible explanation is year-end ‘window-dressing’ by professional money managers, as they put money into the market, bid up stocks and generate a bit of extra positive performance to help appease clients and justify fees. This has been a difficult year for active money managers as indices and individual share prices have whipsawed and the November rally could leave a few laggards chasing performance as the year draws to a close.

But for all of its apparent reliability – the FTSE index has fallen just seven times in December since 1984 and only five times since 2000 – the Santa Rally is not certain to offer anything more than festive cheer. It does not seem to be reliable indicator for the coming year.

If anything some of the best Decembers have led to the most treacherous subsequent years – a buoyant festive season in 1993 was followed by 1994’s Fed rate rise shock, 1989’s knees-up let investors stumble into a recession and a bear market while 1999’s party led to the hangover that came with the collapse of the technology bubble in 2000.