“Of the fourteen FTSE 100 companies to release results in the past two weeks and Severn Trent is the tenth to declare an unchanged or an increased dividend (or even restore payments) alongside them, as the news for income-seekers continues to improve (or at least become less bad),” says Russ Mould, AJ Bell Investment Director.

“Of the other four, Compass and Imperial Brands had already forewarned of their cancellation and cut respectively while the percentage reduction at Johnson Matthey was much lower than previously and the reduction at Pennon was due to a change in corporate structure as the water utility outlined a clear plan to continue to grow its shareholder distribution from here on.

“The modest increase in Severn Trent’s first-half dividend, to 40.63p a share a year ago from 40.03p is in line with the utility’s new growth policy under the AMP7 regulatory cycle which runs from this year through to 2025. 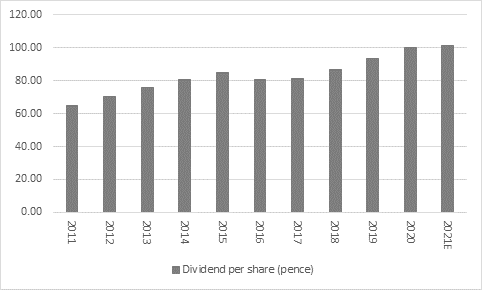 “While the goal to grow the annual pay-out in line with CPIH inflation is less ambitious the target under the prior AMP6 regime, when Severn Trent’s plan was to increase the dividend by four percentage points above the rate of RPI inflation, income-seekers will be grateful nonetheless.

“The stock offers a forward yield of 4.1% based on management’s steer toward a full-year dividend of 101.58p a share, way better than anything that can be achieved from cash in the bank or NS&I or Government bonds, albeit in exchange for greater capital risk. Even then, Ofwat’s decision last year to give fast-track approval of Severn Trent’s pricing and investment plans for AMP7 suggests the utility offers plenty of visibility on cash flow going forward, a facet which offers both reassurance to shareholders and could perhaps act as a lure to potential predators. In a low interest-rate, low growth world, dependable cash flows may appeal to financial (or trade) buyers of infrastructure assets as well as institutional and retail investors.

“From a wider perspective, investors will also be pleased to see Severn Trent joining Vodafone, Experian, Intermediate Capital, SSE, Spirax-Sarco Engineering, Halma, Sage and United Utilities in declaring an unchanged or increased dividend in the last fortnight, while British Land delivered on its prior promise to re-join the dividend list.

“As a result, the tide within the FTSE 100 seems to be slowly turning back toward making or reintroducing payments.

“So far in 2020, FTSE 100 firms have cut, suspended, deferred or cancelled £37.2 billion worth of dividend payments while they have made or declared dividends to a value of £28 billion and restored distributions worth another £2.7 billion.

“The gap between cuts and payments kept or restored is therefore closing inexorably and after the carnage of March, April and May, maintained and restored dividends have exceeded reductions in value in each and every month, with the exception of October, when the latest round of reductions from HSBC, BP and Shell took their toll.

“Looking at every FTSE 100 member’s most-recently published set of results (and Ashtead and DS Smith each have a new set of figures due in early December), 44 firms have made or declared payments, 12 more have restored them (or promised to do so) and 39 have cut, cancelled, suspended or deferred them. (Of the remaining four, CRH and IAG do not habitually pay interim dividends and Ocado and Just Eat Takeaway.com have never made a dividend payment of any kind).

“This means the companies’ last official announcements, payments of £15.1 billion and restorations of £2.7 billion have outstripped cuts, cancellations, deferrals or reductions of £16.2 billion.

“Maybe, just maybe, this gives encouragement to income-seekers and bulls of UK equities more generally. Even if it is too early to be doing a victory lap – as an elongated pandemic, double-dip recession, disorderly Brexit or other factors could still prove highly disruptive – it currently seems as if the FTSE 100’s members’ moves in spring to prepare for the worst, by cutting costs, preserving cash and hunkering down, are starting to pay off. Dividend payments, especially restored ones, usually speak of confidence so it could be a good sign that the value of maintained and restored payments is starting to catch up and exceed those that are still being cut or passed.”