Excluding the sinners, rewarding the winners – how we build our Responsible Growth fund When choosing which companies to hold in our Responsible Growth fund, we employ two approaches:

1. Exclude companies that operate in certain business areas, are deemed to not meet minimum standards on human rights, anti-corruption, employment rights and the environment, or have been involved in serious controversies.

2. Reward companies that take positive steps to integrate environmental, social and governance factors into their corporate strategy, looking to minimise risks and take advantage of opportunities within these areas.

This article explains in more detail how each approach works, the effect it has on both risk and return, and how both approaches complement each other.

Historically, the most popular responsible investment style has been ethical investing. This style excludes companies that do not fit with your morals or values, and spans back as far as the 18th century – when Quakers prohibited their members from being involved in companies linked to slavery. Common areas avoided today include tobacco, alcohol and gambling.

However, pursuing an ethical (or exclusionary-only) style of investment presents three main problems:

One of the biggest challenges is defining a set of business areas for exclusion that match the differing values of investors. For example, investors who exclude for religious reasons may avoid companies that produce contraceptives. But for others, that may be a perfectly acceptable investment.

To satisfy as many investors as possible, the AJ Bell Responsible Growth fund invests predominantly in ETFs that track an MSCI SRI (Socially Responsible Investment) index. These indexes use a standard set of exclusions that we believe will cover the majority of companies considered ‘sin stocks' by most investors. But it’s important to note that certain industries are still included that may appear counterintuitive, such as some oil and gas companies. This is to ensure we strike the balance of different investor’s needs, and as we will discuss later, to not sacrifice returns.

This leads onto the next issue. Defining companies within these areas is often straightforward – such as an alcohol-producing company – but can sometimes be tricky. Should they exclude, for example, a company producing cigarette packets, or a supermarket selling alcohol?

The idea of excluding companies within certain business areas is simple. The process for doing so is much more complex.

Public companies disclose information – such as the breakdown of revenue into different business areas. However, this is often fairly ‘high level’. For example, while ITV may disclose the revenue they generate from advertising, what is less clear is how much of that advertising revenue is from gambling or alcohol products.

In addition, a product has a ‘supply chain’. A tobacco company may produce cigarettes, but different companies make the packaging, the filters, distribute the products and then sell them. However, by using mainly ETFs tracking MSCI SRI Indices, we can harness MSCI’s expertise in defining how to exclude companies. As at 30 June 2020, MSCI had over 370 employees focused on environmental, social and governance issues. Although it is not perfect, we believe using MSCI provides some consistency across our products, and allows us to be confident that we don’t knowingly have exposure to any of the listed business areas.

Historically, ethical investing has been a niche style. This was perhaps because of a belief that excluding companies led to lower returns. Which is fairly intuitive: just because a company generates sales from a product that is deemed unethical by some doesn’t mean it can’t make good profits. By reducing your investment options, you reduce the potential of picking the winning companies. As can be seen in the graph of tobacco returns, below, excluded business areas may outperform the broader markets over certain time periods.

Excluded business areas are often in mature, profitable, but low-growth sectors – whose stocks perform differently to high-growth sectors. This means that depending on the economic backdrop, a strategy excluding these areas will either underperform or outperform. 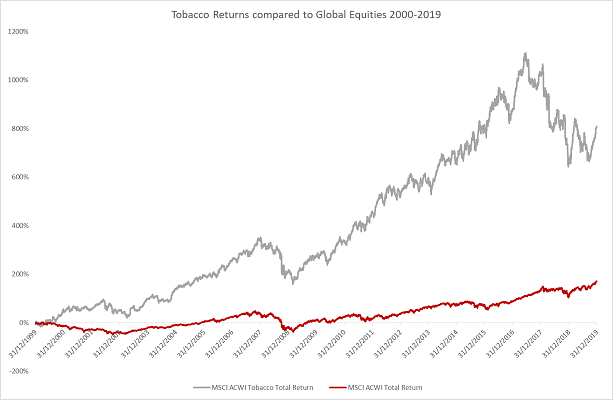 It’s also worth noting that companies within controversial business areas are pivoting their strategy. Some tobacco companies may be moving towards vaping, and some energy companies towards green energy sources. This has helped evolve the idea of rewarding companies making a positive change, rather than blanket exclusions across many parts of the market.

A carrot as well as a stick

By excluding companies, you are essentially washing your hands of them. But it could be argued that this is actually counterproductive at encouraging them to change their practices.

Instead, a ‘best-in-class’ approach has emerged in recent years. The idea here is to select companies best placed to navigate environmental, social and governance risks and opportunities. The big difference between this approach and an exclusionary one is that it doesn’t necessarily lead to lower returns, and in fact some evidence shows it can enhance returns – or at least has done historically.

Before looking at the data, it is perhaps worth considering this logically. The share price of a company is based on its future cash flows. That’s why a company that can produce a growing, consistent profit over decades is rewarded with a higher share price. Being able to navigate environmental and social issues is an indicator of a company’s ability to deal with changing consumer views and regulation, helping it to hit its profit targets.

For example, in July 2018, Amigo Loans floated on the stock exchange at 275p, and immediately moved to a premium of over 300p a share. However, following regulation that capped interest charges in the unsecured lending space – as well as the company’s practice of lending to the least financially secure – its share price suffered significantly. It is now down around 97% since floatation, to just 6p a share. This is an example of a company with questionable social practices suffering because of a business model that may not be sustainable in the long term; and a poor ESG rating score would be a red flag.

It also follows that a company with good governance practices is likely to deliver a more predictable stream of profits. Diversity of thoughts and views is likely to lead to more rounded decision making, and a culture of accountability. Perhaps the most famous recent example of poor governance is Volkswagen. Family-owned, the company has little accountability to an independent board, which helped facilitate its underhand practices to trick emissions testing – a scandal famously exposed in 2015.

Although history is no indication of future performance, the following graph from MSCI shows how moving from a strategy of just excluding companies to a strategy that both excludes, and then rewards the best placed remaining companies on ESG issues, affected risk and returns from June 2013 through to May 2018: 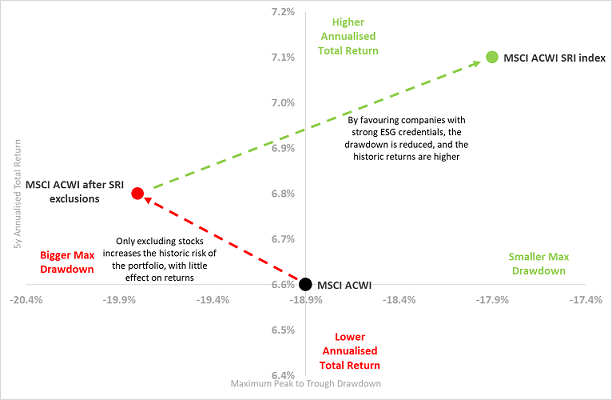 The starting point is the MSCI ACWI benchmark, a measure of global share prices. Following various exclusion methodologies initially the dot moves to the left – i.e. the potential drawdown is larger due to less diversification. However, when integrating the MSCI ESG ratings, the drawdown is reduced and the total return increases.

Within our fund, the use of MSCI SRI ETFs means we get a set of exclusions, while focusing on the best 25% of remaining companies within each sector for ESG rating scores.

We acknowledge that any rules-based approach will not be perfect, and that certain companies will be included that some may disagree with. However, we believe our approach allows an investor to improve the ESG characteristics of their investments without having to sacrifice long-term returns, or take excess risk. For example, the Responsible Growth fund’s carbon footprint is 40% lower than the MSCI ACWI index*.

Our fund won't be suitable for all investors. But if you want to invest more responsibly and don't know where to begin, we aim to offer an easy way to get up and running.

Find out more about the AJ Bell Responsible Growth fund

These articles are for information purposes only and are not a personal recommendation or advice. Remember that the value of investments can change, and you could lose money as well as make it.