The Bank of England has unleashed another £150 billion of QE to help prop up the economy as it enters a second national lockdown. This may not be the end of the Bank’s pandemic interventions, particularly if another lockdown becomes necessary further down the line.

The Bank is beginning to run out of dry powder as it now holds almost half the gilt market. and interest rates are already close to zero. That means if the central bank wants to boost the economy further, it may resort to even more extraordinary measures than we have today.

Negative interest rates are certainly on the table. The Bank is seriously weighing this up and has written to bank chiefs to see if they can handle it. QE could also shift towards different assets, such as more corporate bonds, high yield bonds and even equities, as has happened in Japan.

Much will depend on how the pandemic, social restrictions and the government’s fiscal response proceed from here. For the moment markets are pricing in a 40% chance of an interest rate cut next year, and it’s fair to say that markets have consistently underestimated the capacity for monetary policy to loosen ever since the financial crisis.

This is all terrible news for cash savers, who have endured more than ten years of ultra low interest rates. £210 billion now sits in cash accounts that don’t pay any interest, up from £26 billion in 2008. A further £837 billion is held in accounts paying on average 0.13%.

This money is slowly but surely losing its buying power, even though inflation is currently so low. That won’t be the case for too long, as inflation is expected to move back towards 2% in the first half of next year as lower energy prices fall out of the equation.

Huge amounts of cash have been tucked away since the first national lockdown, to the tune of £88 billion. Savers should make sure that money is working as hard as possible, by shopping around for the best rate and considering fixed term cash products which tend to offer more interest.

For money that can be put away for ten years or more, investors should think about drip feeding some money into the stock market, though it’s important to always keep a cash buffer for emergencies.

The Bank of England is now forecasting an 11% drop in GDP in the last three months of this year. It then projects growth through next year, reaching pre-covid levels by the end of the year, on the premise that social restrictions loosen and the pandemic’s impact on the economy begins to wane. Let’s hope they’re right, even though that looks like a heroic assumption right now.

Looser monetary policy will be broadly good for equities, and for the growth stocks that have led the market for the last ten years. Corporate borrowing will be even cheaper, and while pension deficits may rise, these only have an effect on cashflows through a valuation process that takes place every three years.

We can expect bond prices to nudge up too, but that means yields will fall further, another blow to anyone looking to buy fixed interest securities for income. It will be good for the government however as it will lower its borrowing costs further.

Indeed on the gilts held by the Quantitative Easing programme, the government effectively pays bank base rate on that borrowing. To date that has resulted in a £99 billion windfall for the Exchequer.

The UK government is already paying negative interest rates on some of its debt – earlier this year it auctioned £3.8 billion of borrowing on which buyers agreed to pay the government 0.003% for the privilege of lending money to HM Treasury. 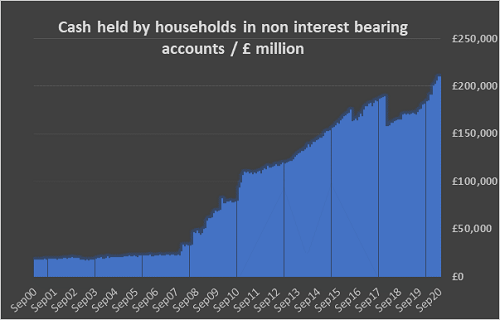 Negative interest rates – what they mean for savers

Experience of negative rates in other countries suggests that even if rates turn negative, most banks wouldn’t charge high street customers to hold money in their accounts, mainly because you can always take cash out of the bank and stuff it in a mattress. Those with higher balances would be most at risk, because a bank account provides security that is hard to replicate without financial cost. While savers might not explicitly pay interest to their bank, it’s possible banks would introduce fees instead, something HSBC said it’s looking at in some markets.

END_OF_DOCUMENT_TOKEN_TO_BE_REPLACED
The value of your investments can go down as well as up and you may get back less than you originally invested. We don't offer advice, so it's important you understand the risks, if you're unsure please consult a suitably qualified financial adviser. Tax treatment depends on your individual circumstances and rules may change. Past performance is not a guide to future performance and some investments need to be held for the long term.