Centamin runs into more trouble on the yellow brick road

Centamin runs into more trouble on the yellow brick road You would have thought that sitting on a gold mine would be a path to instant riches, especially when the precious metal’s price is trading near its all-time high, so shareholders can be forgiven for being frustrated by the latest profit warning from Centamin. Production difficulties at the Sukari mine in Egypt – and management’s completely appropriate decision to put staff and investment in their safety first – mean that production will undershoot and production costs exceed expectations in 2020 and now 2021 as well.

As a result, output of 415,000 ounces in 2021 – the mid-point of management’s guidance – means that production could come in lower than it did in 2015 while the all-in-sustaining cost (AISC) of finding and extracting an ounce of gold will exceed $1,200. 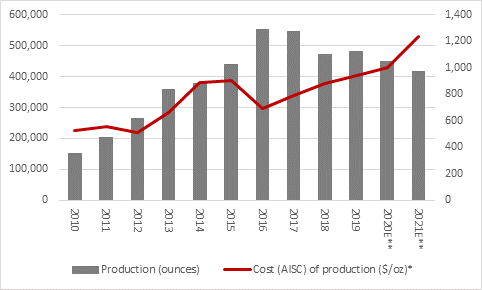 Source: Company accounts. *Costs not directly comparable: based on operating cash cost 2010-2014, All-in-Sustaining Cost post-2015. **Based on mid-point of management guidance given on 21 October. For direct comparisons, operating cash costs forecast mid-point is $765 for 2020E and $912.5 for 2021E.

With gold still trading above $1,900 an ounce, Centamin still has every chance to make healthy profit margins, especially as the FTSE 250 firm’s balance sheet is net cash so there are no net interest bills to pay, but the outcome could have been so much better. 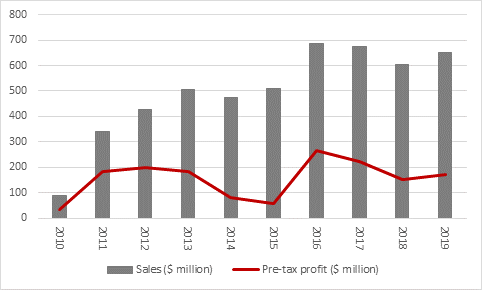 Difficulties at an open pit mine at the Sukari site are a reminder that mining for gold (or any commodity) is not as easy as it looks and investors could be forgiven for thinking that gold miners are almost more trouble than they are worth. Over the past year, gold is up 29% in sterling terms and Centamin is up by 25%, but the point behind owning miners is the operational leverage they bring to the metal’s price: if all goes well, their profits should rise so much more quickly than the price of the commodity, as the bulk of their costs are relatively fixed – unless something goes wrong.

Investors could therefore make it easier for themselves and pick and active or a passive fund that provides them with exposure to a basket of gold miners, to help them spread their risk and manage their downside while providing scope for upside, should the metal’s price continue to advance.

Options here could include BlackRock Gold and General as an actively-managed fund, while passive funds to research could be Van Eck Vectors Gold Miners ETF, which is designed to track the performance of 53 predominantly large- and mid-cap precious metal miners, or the Van Eck Vectors Junior Gold Miners ETF, which aims to deliver the performance of a basket of 80 mainly mid-to-small cap gold miners and explorers.

Both ETFs began trading in London, in dollar- or sterling-priced form, in June 2017.

The former may be better suited to gold bulls who are a little more conservatively inclined, the latter to more aggressive investors, although neither instrument is likely to shine should the price of gold start to retreat. 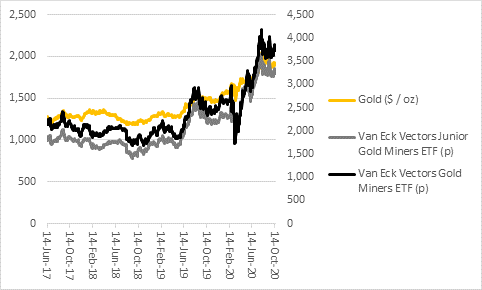 For those intrepid investors who would rather pick their own mining stocks, there is a checklist that they can follow to help them do their research. Key factors to study include:

END_OF_DOCUMENT_TOKEN_TO_BE_REPLACED
The value of your investments can go down as well as up and you may get back less than you originally invested. We don't offer advice, so it's important you understand the risks, if you're unsure please consult a suitably qualified financial adviser. Tax treatment depends on your individual circumstances and rules may change. Past performance is not a guide to future performance and some investments need to be held for the long term.