JP Morgan Chase and Citigroup got the third-quarter reporting season for the US banks off to a good start, as both easily exceeded consensus forecasts, thanks in the main to a big drop in provisions for bad losses on their loan books. Shareholders in the Big Five FTSE 100 banks will be hoping for similar good news after a terrible year so far for their profits and share prices. Barclays will be the first to report on 23 October, followed by HSBC on the 27th, Standard Chartered and Lloyds on the 29th and NatWest on the 30th.

After swallowing $15.3 billion of loan book provisions in Q1 and a further $18.4 billion in Q2, JP Morgan Chase and Citigroup set aside just $2.9 billion between them in Q3. That allowed their combined net income to more than double from Q2 to Q3. 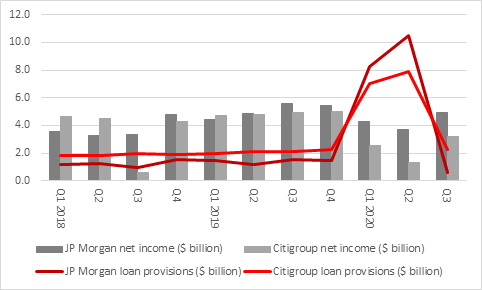 That offers some hope that the US economy is through the worst and investors in the UK’s biggest lenders will be able to provide similar cheer about their target markets. Barclays, HSBC, Lloyds, NatWest and Standard Chartered wrote down their loan books by £7.5 billion in Q1 and £10.6 billion in Q2, the latter being the highest charge since Q2 2010, as their aggregate first-half pre-tax profit plummeted by 77% year-on-year. 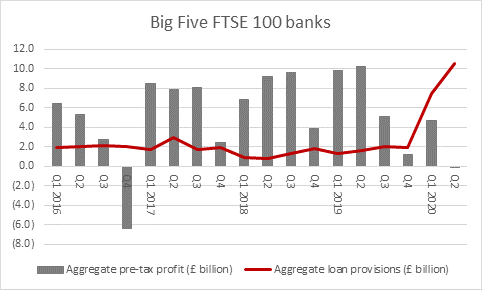 A reduction in bad loans after what could have been a particularly conservative approach to the first half would help profits from and sentiment toward a sector that has been in investors’ doghouse. Banks is the third-worst performer among the 39 industrial groupings which make up the FTSE 350 over the last years, with a 48% drop. Only Autos & Parts, Oil Equipment & Services and Oil & Gas Producers have done worse.

This is because the loan book provisions are not the only thing to have gone wrong, even if the pandemic and recession have been an understandable source of woe. The other pressing problem that faces the big lenders is margin compression on their loan books – the net interest margin continues to grind lower.

This trend was in evidence again at JP Morgan Chase and Citigroup and that may be one reason why their shares did not respond more enthusiastically to what were ultimately big earnings forecast ‘beats’ – JP Morgan racked up earnings per share (EPS) of $2.92 when analysts had been expecting $2.02 and Citi made $1.40 compared to a consensus estimate of $0.80.

But JPM Morgan’s net interest margin slid to 1.75%, down from 2.09% a year ago and Citi’s fell by 53 basis points (0.53 percentage points) to 2.03%. It will be interesting to see what Bank of America and Wells Fargo show on Wednesday but the trend seems pretty clear: 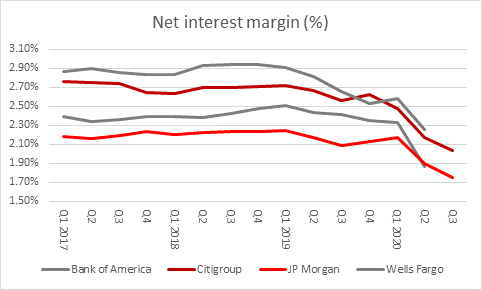 This profit-crushing trend has been in evidence at the FTSE 100 banks for some time as well. A drop in the average net interest margin across the quintet of 52 basis points (0.52%) since Q1 2017 might not sound a lot but on aggregate loan books of £2.2 trillion that is £11 billion of lending profits a year. No wonder the concept of negative interest rates from the Bank of England send a shiver through the banking sector. 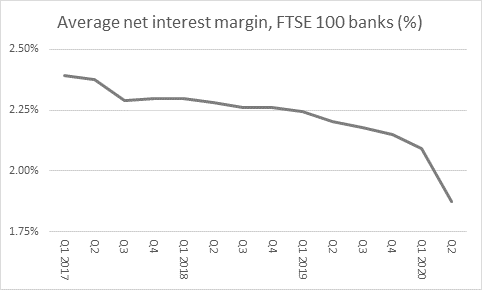 This margin pressure is the result of tighter regulation; competition in what are relatively mature and heavily banked markets and economies that are already heavily indebted; record-low interest rates; and also central banks’ Quantitative Easing policies which are designed to hold down bond yields and also flatten the yield curve.

The FTSE 100 banks’ horrible performance over the past decade, let alone the past year, does seem to bear some resemblance the ongoing compression of the 2s-10s spread (the difference in yield between two- and ten-year UK Government gilts). 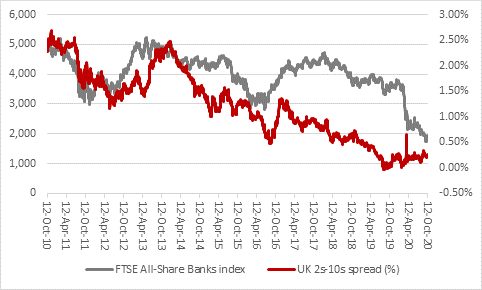 And this crushing of margins, in addition to the uncertain economic outlook thanks to the pandemic and record high global debt, that leaves the UK banks trading at well below the net asset value (or book value) per share. This is markets’ relatively polite way of saying it does not believe the official valuation of the assets on the banks’ balance sheets, because they are struggling to make a decent return on them.

Value-hunters may argue that here lies the opportunity. Banking shares are bombed out, unloved, have underperformed and look cheap. The question is what will make investors want to get involved again.

Permission from the Prudential Regulatory Authority to start paying dividends again would be one potential catalyst. That may only be forthcoming once the pandemic is beaten off and the economic outlook less cloudy – although analysts still expect all five FTSE 100 banks to pay a dividend for fiscal 2020 by announcing a full-year distribution alongside the final results in calendar 2021. Consensus also expect a hefty hike in pay-outs in 2021, although some investors may view those estimates as optimistic, at least given current circumstances.

An economic upturn would be the best news of all, especially if it brought some long-awaited inflation with it. That could in turn force bond yields and spreads higher, bringing much-needed relief to net interest margins, while it would also ease the need to take any further dramatic loan loss provisions.

END_OF_DOCUMENT_TOKEN_TO_BE_REPLACED
The value of your investments can go down as well as up and you may get back less than you originally invested. We don't offer advice, so it's important you understand the risks, if you're unsure please consult a suitably qualified financial adviser. Tax treatment depends on your individual circumstances and rules may change. Past performance is not a guide to future performance and some investments need to be held for the long term.