How much good news is baked into Apple’s share price ahead of the latest product launch?

How much good news is baked into Apple’s share price ahead of the latest product launch? Apple’s shares are rolling higher again as investors get excited about the latest round of product launches, including a hotly-anticipated 5G phone, but the stock’s history suggests that the markets have a classic habit of buying on the rumour and then selling (or at least pausing for breath) after the fact.

In the six months before the firm’s eight previous major generational product launches, dating all the way back to the original iPhone in 2007, Apple’s shares have risen by an average of 20%, only to then pretty much flat-line for the six months after launch, with an average advance of just 4%. They have then tended to start motoring again in anticipation of future product upgrades and how they drive fresh sales of phones and – increasingly – consumption of apps and content.

The potentially tricky bit this time is the degree to which Apple has already surged ahead of the new range of launches – the shares have racked up their biggest ever six-month capital gain ahead of a product release of almost 61%, compared to that long-run average of 20%.

This could mean that a lot of the good news is already baked into the stock and its valuation even before the launch announcement from chief executive officer Tim Cook. 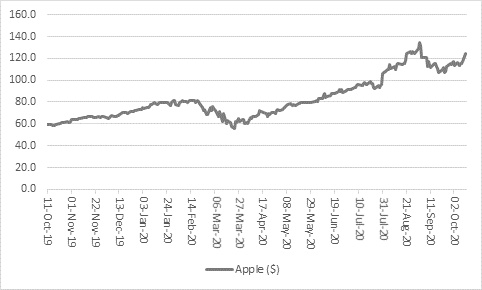 The shares may be trading a few per cent below their early-September all-time high of $134, reached in the wake of August’s four-for-one stock split, but the company’s market capitalisation is still $2.1 trillion.

That compares to consensus annual sales forecasts for the fiscal year that ended in September 2020 of $273 billion and for revenues of $314 billion in the financial year just begun.

Put another way, it would take Apple 6.5 years to give shareholders their money back even if it paid out 100% of sales as dividends (a practical impossibility), assuming sales flat-lined.

Clearly the assumption is that sales and profits are going to grow and quickly, but even here Apple’s future product roadmap and the development of apps and services revenues is going to have to be strong to live up to investors’ lofty expectations.

Based on consensus earnings per share (EPS) forecasts for the year to September 2020 of $3.24 Apple trades on 38.4 times historic earnings and 31 times earnings, using the consensus forecast for EPS for September 2021 of $4.01.

If you assume that EPS stays flat therefore after $4.01, it would take Apple 31 years to earn its market cap and justify its price tag.

Again, investors are working on the premise that Apple is a growth company, with strong management, a cast-iron balance sheet and a competitive position that makes it hard to dislodge from its leading positions in its chosen fields.

Yet the firm’s recent growth record is not quite as stunning as it seems. 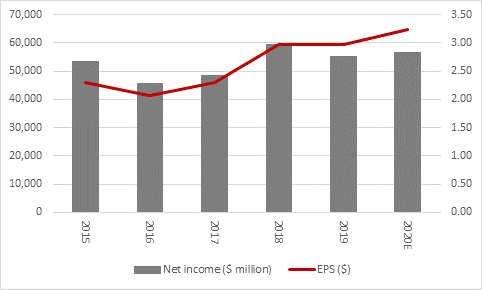 In the fiscal year to September 2015, so five years ago, Apple made a net profit of $53.4 billion, making $11.1 billion in the July-September period.

For the fiscal year to September 2020, which Apple will report on 29th October, analysts expect Apple to make a net profit of $56.6 billion, of which $11.9 billion came in the fourth quarter. 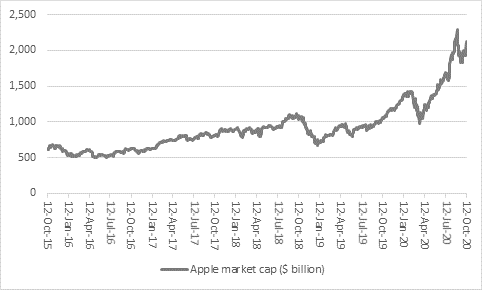 To justify this, investors will acknowledge the way in which share buybacks have boosted earnings per share – but that is financial engineering and not product engineering so its value surely cannot be that high.

They will also argue that Apple deserves a scarcity premium because it is well run, has a cast-iron balance sheet, a formidable competition position in its chosen fields, offers a track record for innovation to defend and enhances that position. As such it is seen as a safer option than many other companies in the current environment and one worthy of a premium valuation (since the S&P 500 trades on 22 times forward earnings, according to FactSet, compared to Apple on 31 times), especially if you believe that profits growth is about to reaccelerate thanks to 5G and also possibly the pandemic, as people consumer more data and content over their mobile devices while they work from home or are living under some degree of lockdown.

Investors must therefore decide whether the monster run-up in Apple’s shares ahead of the new product launch and its valuation premium are defensible or not.

Disciples of Benjamin Graham may be less enthused from a valuation perspective, especially if they adhere to his maxim that ‘The intelligent investor is a realist, who sells to optimists and buys from pessimists.’ That said, Warren Buffett is a Graham disciple and he owns 980 million Apple shares, worth some $122 billion, so the Sage of Omaha still clearly believes that the stock offers growth at a reasonable price, at the very least.

END_OF_DOCUMENT_TOKEN_TO_BE_REPLACED
The value of your investments can go down as well as up and you may get back less than you originally invested. We don't offer advice, so it's important you understand the risks, if you're unsure please consult a suitably qualified financial adviser. Tax treatment depends on your individual circumstances and rules may change. Past performance is not a guide to future performance and some investments need to be held for the long term.