HSBC, Standard Chartered, Barclays and NatWest are all toward the bottom of the performance list in the FTSE 100 in early trading after the latest monetary policy statements from the US Federal Reserve and the Bank of Japan, as both authorities promise to anchor interest rates at record lows. The Bank of England, already debating the merits of negative interest rates, is unlikely to be any more aggressive, given the uncertain economic backdrop, record levels of global indebtedness and its desire to keep cheap credit flowing – but central bank policies may be (unwittingly) doing more harm than good when it comes to the major lenders.

Low base rates drag down the interest rates that banks can charge on loans and Quantitative Easing (QE) is designed to flatten out borrowing costs too, with the result that credit spreads (the premium in interest rate that a company has to pay relative to a Government) are also relatively low.

The net result is that the net interest margin on banks’ loan books is under fierce pressure, seriously undermining banks’ profitability and their ability to earn decent returns on equity.

An average decline in the net interest margin across the Big Five FTSE 100 banks of 52 basis points (0.52 percentage points) since Q1 2017 might not sound a lot. But that represents a 22% drop in the lending margin and on their current aggregate loan books of £2.2 trillion. That is the equivalent of £10 billion in interest a year – profit which could have been used to make fresh loans, perhaps, buffer balance sheets or even pay dividends to shareholders. 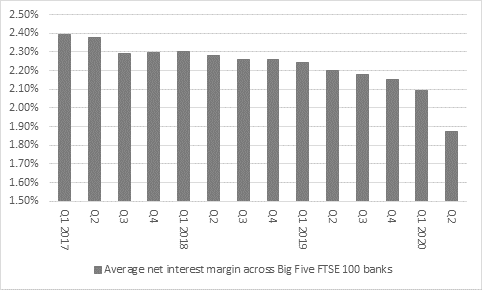 Given the margin-crushing powers of zero-interest-rate (ZIRP) and Quantitative Easing (QE) policies, it is no wonder bank shares are performing terribly. The Banks sector is the third-worst performer in the FTSE 350 this year, down 50% (with only Oil Equipment & Services and Oil & Gas Producers doing worse. It is also the second-worst performer over the last ten years, trailing just Oil Equipment & Services and the banks’ performance since late 2006, just before the credit crisis struck, suggests that the Bank of England’s monetary medicine is not making them feel better, but worse: 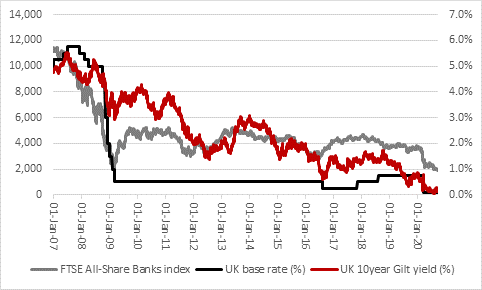 This trend is evident elsewhere. In Europe, the ECB has been tinkering with zero interest rates (and negative deposit rates) for some time, to no great effect so far as its 2% inflation target is concerned, but with deleterious consequences for banks’ profits and the returns on offer to their equity holders. 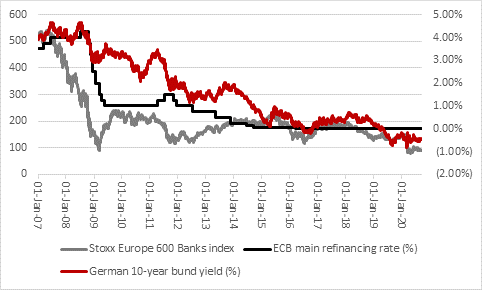 Unfortunately, investors in banks had already been warned of what might come their way. After all, the Bank of Japan has been fighting the effects of the bursting of a debt-fuelled stock market and property bubble since 1990, some 17 years before a similar fate befell the UK, Europe and America. The effects of three decades of QE and ZIRP upon Japanese banking stocks are all too clear to see, and the Bank of Japan’s record in promoting consistent economic growth and 2% inflation, in line with its target, is spotty at best. 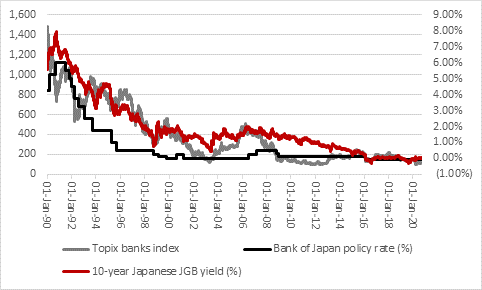 Only US banking stocks have shown any real signs of life in the past few years, but the pandemic, a recession and reversal of Fed policy from tightening to easing (and running policy loose until at least 2023) has taken care of that in 2020. 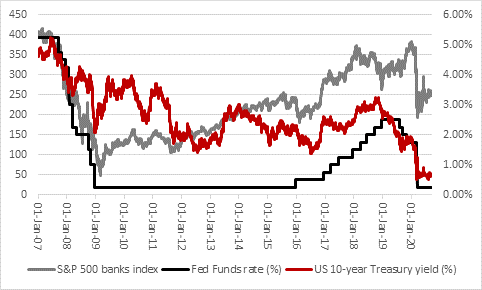 At least the experience of America’s investors suggest that banks need – from their narrow perspective of their share price – is rising bond yields, as that may help lending margins (although what it could do to their loan books when it comes to sour loans and impairment charges is another matter). For now they are stuck in a ZIRP trap, so some economic growth and inflation would be very welcome, as both would be potential triggers for bond yields to rise.

Stimulating that growth and inflation has generally proven beyond central banks’ ZIRP and QE policies in Japan since 1990 and the US, UK and the EU 2009, at least on a consistent basis. ECB President Christine Lagarde and Fed Chair Jay Powell continue to call for further fiscal stimulus and perhaps the combination of Government spending and ultra-loose monetary policy will save the day, at least so far as the banks are concerned.

But until Governments pull the trigger on more spending and higher deficits, banking stocks may continue to recoil from central bank policy statements which promise low interest rates for longer or even the dreaded prospect of negative interest rates.

Why stocks have fallen despite beating earnings

END_OF_DOCUMENT_TOKEN_TO_BE_REPLACED
The value of your investments can go down as well as up and you may get back less than you originally invested. We don't offer advice, so it's important you understand the risks, if you're unsure please consult a suitably qualified financial adviser. Tax treatment depends on your individual circumstances and rules may change. Past performance is not a guide to future performance and some investments need to be held for the long term.