What could make ‘value’ stocks finally outperform tech and ‘growth’ once more?

What could make ‘value’ stocks finally outperform tech and ‘growth’ once more? Warren Buffett once noted that ‘A pack of lemmings looks like a bunch of rugged industrialists compared with Wall Street when it gets a concept in its teeth’ and those investors who piled in to tech stocks must now ask themselves why they were buying and what they should do after three days of sharp falls.

If they were just buying because they felt everyone else was and were simply looking to flip the paper on to someone else, they may feel pretty exposed and unsure of what to do. If they were buying out of conviction that companies such as Facebook, Alphabet, Amazon, Apple, Netflix and Microsoft – the FAAANM sextet which still represents a quarter of the S&P 500 index’s total valuation on its own – have such dominant market positions, shrewd management, strong finances and powerful future cash flow prospects that they deserve even higher valuations then they may be inclined to buy on the dips.

This temptation to run with the narratives that technology stocks are relatively immune to the pandemic and worth premium valuations because of the relative scarcity of consistent earnings growth right now is quite understandable.

But there remains the danger that neither narrative is particularly new and is therefore at least partly priced in to technology stocks’ valuations.

Just look at how ‘growth’ stocks in the USA have wiped the floor with ‘value’ stocks over the past decade and since 2017 in particular. This can be seen by analysing the performance of the Invesco QQQ Trust, an exchange-traded fund (ETF) designed to track and deliver the performance of the heavyweight NASDAQ 100 index (minus its running costs), relative to the iShares Russell 2000 Value ETF, which seeks to do the same for a basket of around 1,400 American small-cap ‘value’ stocks: 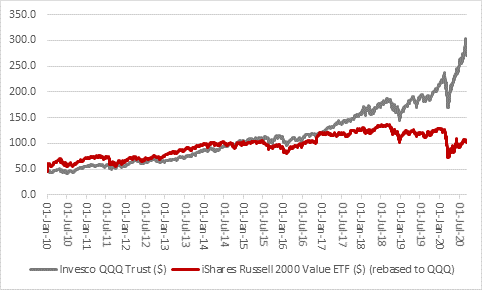 Since January 2010, the iShares Russell 2000 Value ETF is up by 124% in capital terms, for a compound annual return of 7.8% - so it is hard to argue that ‘value’ has ‘failed’ as a strategy. What is clear is that ‘growth’ has simply done so much better, offering a 490% return, or a compound annual growth rate of 18%, as benchmarked by the Invesco QQQ Trust.

The performance gap between the two stands at a decade high.

But it may surprise less experienced investors to learn that the last decade’s stellar outperformance from ‘growth’ has only just begun to cancel out the prior decade’s grinding period of marked underperformance relative to ‘value’, taking 2000’s launch of the iShares Russell 2000 Value ETF as a starting point. 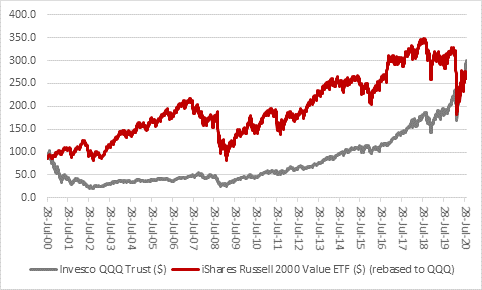 That miserable ten-year showing followed the bursting of the tech, media and telecoms (TMT) bubble, so investors in tech and growth stocks now need to ask themselves whether they should fear a repeat.

Valuation alone is never a catalyst for out- or –underperformance, but it is the single biggest determinant of long-term investment returns (and a decade seems like a suitable definition of long-term). If tech earnings keep growing and surprising on the upside, if interest rates stay low, if inflation stays subdued and the FAAANM stocks use the combination of product innovation and acquisitions to maintain and even deepen their powerful competitive advantages, then many investors will be tempted to dismiss valuation as an irrelevance.

But the trouble could start if regulators begin to take a hand, earnings disappoint (as Big Tech does not prove to be immune to the pandemic after all or the law of large numbers means it simply becomes harder to generate strong percentage growth figures) or the wider economy starts to accelerate and inflation picks up.

None seem likely now but that it why ‘growth’ has done so well relative to ‘value’.

If a COVID-19 vaccine is quickly and successfully developed and distributed, then stocks which are seen as ‘immune’ from the pandemic may be less in demand and seen as less worthy of a premium valuation.

Equally, if growth and inflation pick up, then investors may not be so inclined to pay such premium multiples for ‘growth’ companies, if rapid earnings increases can be acquired much more cheaply along downtrodden value, cyclical plays like industrials, financials and consumer discretionary plays.

Moreover, an increase in inflation could force Government bond yields higher, even if central banks decline to raise interest rates and let inflation run hot, as per the US Federal Reserve’s new ‘average’ inflation target.

Prior periods of rising 10-year US Treasury yields have coincided with attempted rallies in ‘value’ names, so perhaps a return to economic growth and inflation could be the trigger for a sustained period of underperformance from ‘growth’ and ‘tech’ stocks relative to value ones. 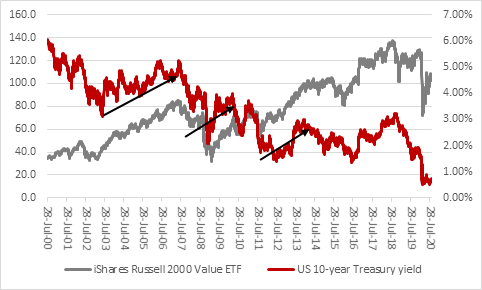 Markets retreat after Fed guidance, Next fights back, and tough times for Trainline

END_OF_DOCUMENT_TOKEN_TO_BE_REPLACED
The value of your investments can go down as well as up and you may get back less than you originally invested. We don't offer advice, so it's important you understand the risks, if you're unsure please consult a suitably qualified financial adviser. Tax treatment depends on your individual circumstances and rules may change. Past performance is not a guide to future performance and some investments need to be held for the long term.