Who on earth would want to be a bank in the current environment? Banks are the fourth-worst performing sector in the FTSE All-Share this year (out of 39) and Barclays’ interim results show many of the reasons why: rising bad loans thanks the pandemic and associated economic downturn, pressure on net interest margins thanks to record-low interest rates and no dividends as a result of regulatory intervention. Even a strong performance from the much-maligned investment bank could not prevent a 77% year-on-year drop in headline pre-tax profit. 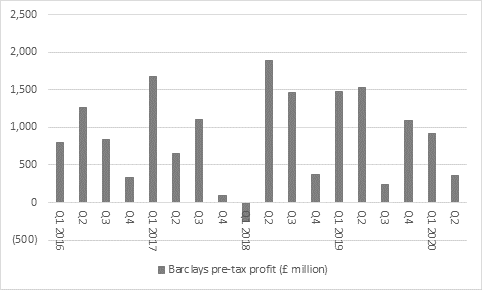 However, to put this in context, many of Barclays’ woes are not new – the Banks sector is the second-worst performing sector over the past decade, so it has been a stinker for a long time, not just this year.

So, to repeat, who would want to be a bank?

Central bank manipulation of interest rates and the yield curve are crushing net interest margins. Neither low interest rates nor QE seem likely to go away in a hurry, either. Barclays UK’s net interest margin is now 2.69%, down from 3.62% at the start of 2016. A drop of 93 basis points (0.93%) may not sound a lot but it all adds up on a loan book that still stands at £355 billion. 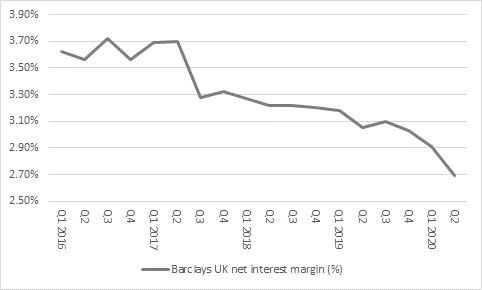 The West is already heavily indebted, as the authorities have tried to paper over the effects of the Great Financial Crisis by making debt cheaper and encouraging Governments, corporations and consumers alike to borrow more, to keep the economic plates spinning. As a result, the scope for lending growth is low, unless the banks want to take on a lot of risk for modest returns in terms of their lending margin and it is unlikely that regulators or shareholders will welcome that sort of risk-taking. The economic foundations are built on debt so they are fragile and bad loan provisions are quickly piling up. The only good news here is Barclays is hopeful that the second-half’s bad loan provisions will come in below the first half’s £3.7 billion, at least in the absence of a second-wave of the pandemic. 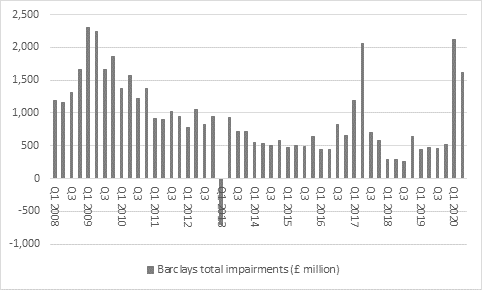 To compound the bad loan situation, banks are being encouraged by the authorities to cancel dividends and buybacks so they have more capital to lend, or at least with which to absorb bad loans. This new role as politicians’ economic policy tool is unlikely to be welcomed by boardrooms or shareholders but it seems unavoidable, at least for the moment.

In the absence of growth – although Lloyds is going down the wealth management route and Barclays is still looking to its investment bank – the banks need to offer a fat yield to appeal to investors and compensate them for the risks associated with holding their shares.

None of the FTSE 100’s Big Five is going to pay a dividend in calendar 2020 but that still leaves them room to decide on a fourth-quarter dividend alongside their full-year results and Annual General Meetings in early 2021. They might not like it, but the loan losses racked up so far in 2020 would suggest the Prudential Regulatory Authority was right to propose the dividend and buyback ban – Barclays Common Equity Tier 1 (CET1) ratio went up in Q2, despite the loan losses, so its capital base is holding firm. This could at least provide a spring board for future dividend payments, assuming the pandemic does not unduly linger and the economy shows something like a recovery in the second half of the year.

Analysts’ confidence in this optimistic scenario does seem to be wavering a little, as the consensus forecasts for Barclays’ calendar 2020 and 2021 dividends have slipped to 1.6p and 4.3p a share, compared to 2.6p and 6.1p back in April. 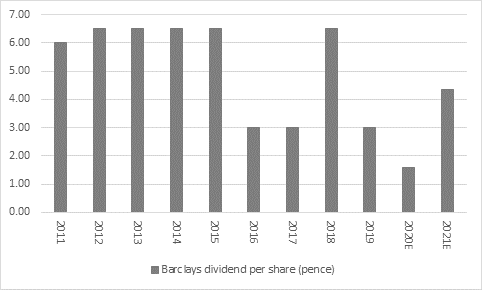 With earnings and yield both depressed, investors have to turn to book value to assess the bank’s valuation. The good news is Barclays looks very cheap here as its shares trade at barely 0.4 times their tangible net asset value (NAV) of 284p. The bad news is finding what could unlock this value, or change investors’ perception that it is at risk of major downgrades, is hard to find.

A rip-roaring economic recovery with a smattering of inflation and some interest rate increases, accompanied by an ongoing financial bull market, is probably the dream scenario, although the lowly multiple of book value suggests that investors are pretty sceptical about the prospect of such a dramatic change in the backdrop right now.

END_OF_DOCUMENT_TOKEN_TO_BE_REPLACED
The value of your investments can go down as well as up and you may get back less than you originally invested. We don't offer advice, so it's important you understand the risks, if you're unsure please consult a suitably qualified financial adviser. Tax treatment depends on your individual circumstances and rules may change. Past performance is not a guide to future performance and some investments need to be held for the long term.