Gold’s potential as an investment arouses strong emotions. Some investors love it as a potential hedge against inflation, some against deflation and some against unforeseeable disasters and market dislocations, while others detest it, viewing the precious metal as a barbarous relic or inert useless lump. But with gold reaching a new all-time high, the bulls are putting the bears to flight right now. Whether this is because the market is pricing in the almost unthinkable return of inflation, a prolonged recession or more central bank money printing and higher government deficits is hard to divine but the metal’s strong run is by no means over, if certain measures prove a reliable guide once more.

Gold’s surge to a new all-time high of $1,935 an ounce may deter some investors from taking a position. But the metal’s price only represents 0.59 times the value of the S&P 500 stock index’s value and that is barely half the post-1970 average of 1.14x.

It also pales next to the 1.60x times multiple that gold reached at its previous all-time peak on autumn 2011 and comes nowhere near the highs relative to the S&P 500 of the mid and late-1970s when inflation was running absolute riot. If inflation does pick up – perhaps thanks to the combination of record low interest rates, Quantitative Easing, supply-chain disruption around the world thanks to COVID and firms increasing prices to meet extra costs of simply staying in business – then this suggests gold has further to go (or, alternatively, the S&P 500 is about to suffer a nasty accident). 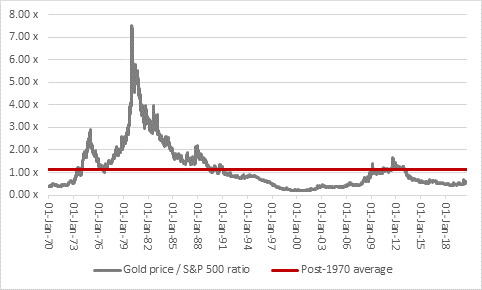 Another case for gold trotted out by bulls is that central banks continue to magic money out of thin air, in the form of Quantitative Easing, with governments increasing deficits and spending more than they earn for good measure. This makes classical ‘Austrian school’ economists in particular feel queasy, as they define inflation not by changes in price but change in money supply, relative to the volume of services and goods produced.

This may be one reason why gold bugs are again active, as the US Federal Reserve had ramped up QE in 2020 in response to the pandemic, taking its total assets from $4 trillion to $7 trillion, though a series of programmes designed to buy a wide range of financial instruments. 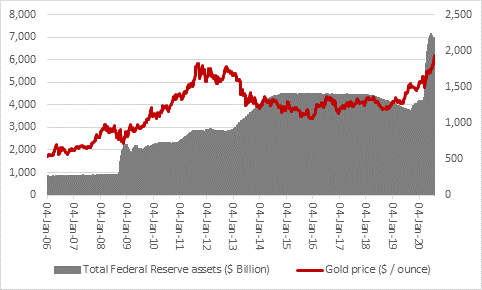 Gold surged between 2008 and 2011 as the Fed ran its first three rounds of QE but then lost ground as it looked like the monetary authorities had regained control of the economic situation. The pandemic may have changed all that, and the cost of keeping the show on the road this time around has already been much higher. One question that buyers of gold may already be asking themselves is what action will be taken by the Fed and other central banks next time a recession hits, as the system will feature even more debt and potentially be even more susceptible to an unexpected shock.

A crude ratio between the gold price and the size of the Fed’s balance sheet, measured in billions of dollars, suggests gold could go higher, unless the US central bank proves confident enough in the American economy to rein in monetary stimulus – something it tried between 2015 and 2019 but a few shocks even before COVID meant that it didn’t get very far.

In this context, gold’s price in dollars represents just 0.27 times the Fed’s balance sheet in billions of dollars, so gold’s rise so far looks pretty modest relative to the amount of QE pumped into the financial system and economy by the central bank. 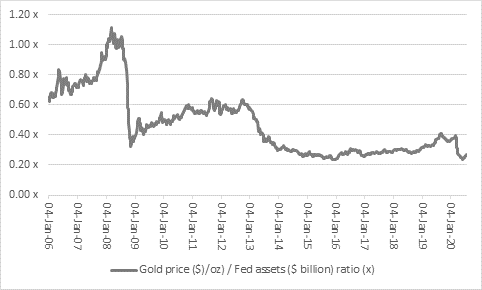 One other point that fans of gold might make is to assert that gold miners are still potentially cheap relative to gold. Granted, the share prices of leading producers like Newmont Mining and Barrick Gold may be up by more than 50% in 2020 so far, but the HUI Gold Bugs index still stands at just 0.18 times the value of gold, compared to a lifetime (post-1997) average of 0.31x and an all-time high of 0.62x times in 2003.

Gold producers offer huge leverage into changes in the gold price (up or down) as their costs are largely pretty fixed, so a minor change in price can lead to huge changes in profits, cash flow and therefore ultimately dividends. 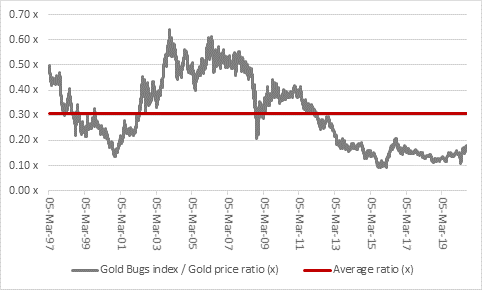 If gold keeps going higher, then the miners really could make hay as the precious metal shines, although there is no guarantee of this – if COVID is contained and beaten and the economy bounces back more strongly than hoped then the need for a haven asset like gold might not be needed - as the American economist Joseph Stiglitz noted, ‘the only perfect hedge is in a Japanese garden.’

END_OF_DOCUMENT_TOKEN_TO_BE_REPLACED
The value of your investments can go down as well as up and you may get back less than you originally invested. We don't offer advice, so it's important you understand the risks, if you're unsure please consult a suitably qualified financial adviser. Tax treatment depends on your individual circumstances and rules may change. Past performance is not a guide to future performance and some investments need to be held for the long term.