Shareholders left wishing they could return Royal Mail to sender

Shareholders left wishing they could return Royal Mail to sender Today’s full-year results from Royal Mail, which live down to very low profit expectations, confirm the cancellation of the dividend and acknowledge the firm’s failure to move with the times, mean the debate over who got short-changed and by how much when Royal Mail was floated by the Cameron-Osborne administration in autumn 2013 is over. As it turns out, it was taxpayers who got the better end of the sale at 330p a share. Investors, who should have known the risks they were taking with the stock and unfortunately employees, who may not have, got the worst of it.

The shares now trade at barely half of their flotation price and the likely absence of a dividend in the year to March 2021 demolishes what was left of the investment case for the stock when it was floated. That had rested largely on Royal Mail’s consistent cash flow and dividend yield, although the foundations of that thesis had been crumbling for some time.

Today’s full-year results lived down to the (previously lowered) guidance for (adjusted) operating profit of between £300-340 million for the year to March 2020, as the end result was £325 million, a 40% drop from a year ago. Statutory, unadjusted operating earnings fell 36%. 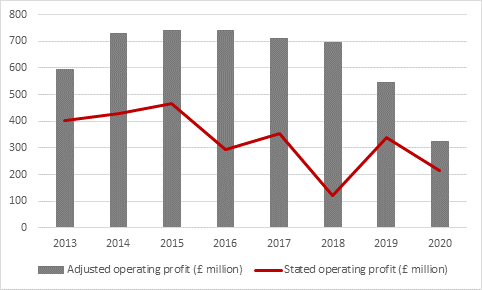 The litany of woes which lies behind this slump shows the scale of the challenge which faces interim chief executive Keith Williams, who is in the hot seat after the sudden departure of Rico Back in May.

Even though the international GLS operation performed solidly enough, parcel revenues rose more slowly than expected and this failed to compensate for the ongoing slide in letter volumes in the UK.

The pandemic has accentuated these trends, as letter volumes have plunged by 33% in the first two months of the new financial year, hampered by a plunged in advertising flyers, and although parcel volumes are up 37%, revenues are up by only 28%, to show what a cut-throat business that it when it comes to pricing. Throw in higher operational costs thanks to the pandemic and a hit to business-to-business volumes at GLS, plus a further £150 million in restructuring costs as Royal Mail embarks upon its latest redundancy programme, with senior managers bearing the brunt of it this time around, and analysts see the company falling into loss in the year to March 2021. 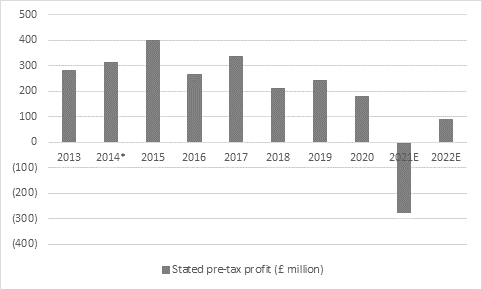 At least Mr Williams seems confident that the cost-cutting will return the business to the black in the year to March 2022, when he believes growth at GLS will underpin cash flow and permit a return to the dividend list. 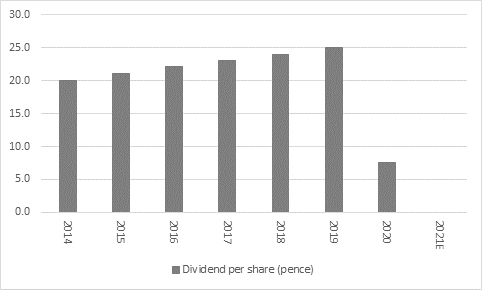 However, a fair few things may still need to drop right for that to happen, some of which are within the CEO’s control and some of which are not. The effects and duration of the pandemic are not, whereas industrial relations are something which he can influence. The Union of Communication Workers voted to strike by a huge margin in March, after October’s ballot was thwarted by court action, and that threat still lingers, even if the UCW elected to delay any industrial action so it could help communities deal with the impact of the viral outbreak.

Mr Williams today stresses his desire for open talks with the union, although the plan that pay increases will be funded by productivity improvements through to March 2022 is not a new one and has been a source of labour relations friction and shareholders disappointment in the past.

At least the new boss’ admission that the firm has moved too slowly to adapt to a world of fewer letters and more parcels is frank and honest. Cost cuts, operational changes and talks with the unions on how to make these changes are all steps toward helping Royal Mail to adapt. Employees and investors who have been holders of the shares since the stock market listing will be hoping that they are not coming too late.

END_OF_DOCUMENT_TOKEN_TO_BE_REPLACED
The value of your investments can go down as well as up and you may get back less than you originally invested. We don't offer advice, so it's important you understand the risks, if you're unsure please consult a suitably qualified financial adviser. Tax treatment depends on your individual circumstances and rules may change. Past performance is not a guide to future performance and some investments need to be held for the long term.