Ashtead keeps dividend streak alive as it focuses on cash

Ashtead keeps dividend streak alive as it focuses on cash Reports of a $1 trillion infrastructure plan from the White House in the USA could make it a doubly good day for investors in Ashtead, as the equipment hire specialist is already pleasing them with an unchanged final dividend for its financial year to April. That means the full-year payment is up very slightly on last year, to both confound analysts’ expectations of a cut and maintain an annual dividend growth streak that stretches back to 2006. Such a show of confidence is likely to go down well as shareholders wait to see how quickly industrial activity bounces back in the firm’s US, Canadian and UK markets. 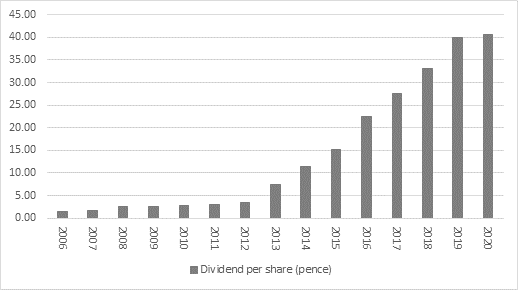 Sacrifices have been made along the way, as capital investment budgets were pruned back, merger and acquisition activity curtailed and the share buyback programme suspended, over and above day-to-day cost reductions, but Ashtead makes it clear that it has not made anyone redundant and nor has it tapped Government-backed job retention schemes in the UK or Canada.

This focus on cash generation is helping the firm – and its investors – come through the downturn and meet key bills such as lease payments and also the £240 million interest charge on its £4.3 billion net debt position, because trading became much tougher in the final three months of the year.

That can be seen from the 7% dip in the stated full-year pre-tax profit figure to £983 million, the first year-on-year decrease since 2011, which was the result of a 52% fall in the fourth and final period. 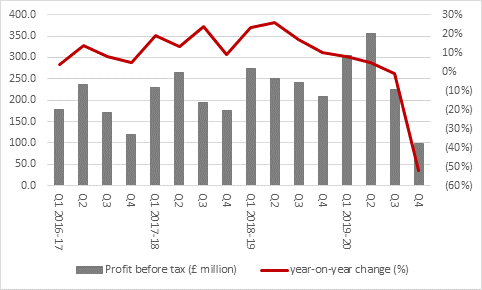 The good news is that the size of the fleet available to rent at Sunbelt, the US operation which provided 85% of group sales and more than 90% of profits last year, started to stabilise in mid-April and it has since grown as the business had adopted to new working practices.

However, rental revenue at Sunbelt fell 3% in March, 12% in April and 14% in May so shareholders will be hoping for a pick-up in the second half of 2020 and beyond. Before today’s figures analysts were looking for a sharp drop in profits in the year to March 2021 and a dividend cut. 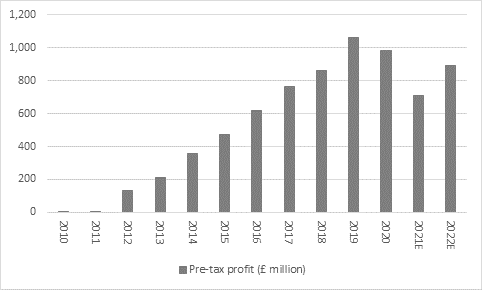 President Trump’s reported $1 trillion infrastructure spending plan could help here, as it should play straight to Ashtead’s core strengths. Its equipment will be needed if such schemes are to be implemented quickly and it will be interesting to see if US industrial sentiment surveys start to pick up more rapidly. If so, that has traditionally been a good sign for Ashtead’s shares, although the White House will still have to persuade Congress of the merits of adding in the short term to an already huge annual budget deficit and finalise the details of where such fiscal largesse will be spent. 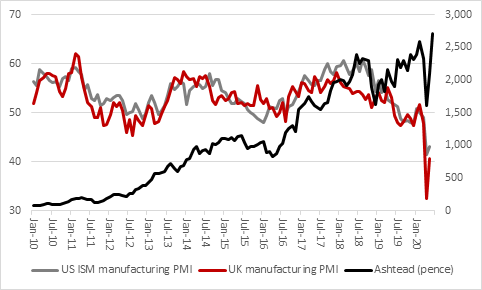 Any pre-election boondoggle could help Ashtead in its quest to maintain cashflow and keep that dividend streak going even further. For the moment, Ashtead’s decision to offer an unchanged second-half dividend and increased final one means it becomes the 48th FTSE 100 firm to declare an unchanged or increased payment for its last financial year, against 48 that have cut, deferred, suspended or cancelled their distribution. Pending shareholder approval at the AGM, the 33.5p dividend will be paid on 11 September.

Source: Company accounts. 48 FTSE firms have cut, suspended, deferred or cancelled payments, 48 have retained or increased them, five have yet to comment and two (Just Eat Takeaway and Ocado) do not pay dividends. The total is 102 because both Admiral and Morrison paid ordinary dividends but deferred or cancelled special dividends so they both feature twice.

What US stimulus and infrastructure news means for markets

Just when stocks looked to be hitting a sticky patch, new stimulus measures by the US Federal Reserve and reports of a potential Trump administration...

END_OF_DOCUMENT_TOKEN_TO_BE_REPLACED
The value of your investments can go down as well as up and you may get back less than you originally invested. We don't offer advice, so it's important you understand the risks, if you're unsure please consult a suitably qualified financial adviser. Tax treatment depends on your individual circumstances and rules may change. Past performance is not a guide to future performance and some investments need to be held for the long term.