Boosted by governments’ plans to ease their respective lockdowns, as well as fiscal and stimulus programmes designed to support the global economy, banking stocks had been on a roll worldwide, at least until the US Federal Reserve’s statement yesterday, but the UK was a notable exception to that trend, as performance from the Big Five FTSE 100 banks had remained tepid at best. The FTSE All-Share Banks index has hugely underperformed its global peers since global stock markets bottomed in late March, a feat it has unfortunately managed for the whole of 2020 and all of the last 12 months for good measure.

Source: Refinitiv data to the close on Tuesday 10 June

The banks are trying to forge a rally but it is one that lacks conviction: the sector is the single worst performer in the FTSE since the bottom on 23 March and the only one to record a loss since then.

This seems odd when investors are seeking to price in the benefits of fiscal and monetary support for the economy and a recovery in overall activity and corporate profits, something that should help consumers and corporations alike meet their interest bills and thus put a lid on potential defaults and unpaid interest.

It seems doubly strange in the context of how the yield curve has steepened for much of the last nine months and how the wider gap between the UK two- and ten-year Government bonds would normally herald higher lending margins. 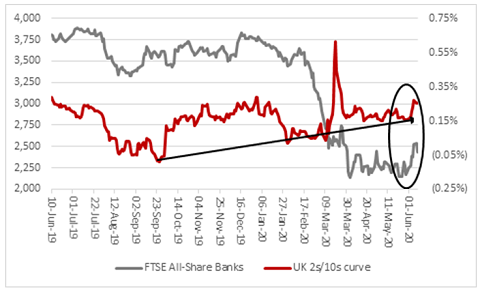 Perhaps it reflects concerns that banks are being used as public utilities during the crisis, with the forced scrapping of dividends by regulators and obligations to offer fresh loans, or at least payment holidays, to corporations and consumers alike, almost regardless of whether the money can be finally paid back. In total the Big Five banks took £7.5 billion in provisions for loan losses between them in Q1, and that helped to drive their aggregate pre-tax income down by £5.1 billion, or 52% year-on-year. 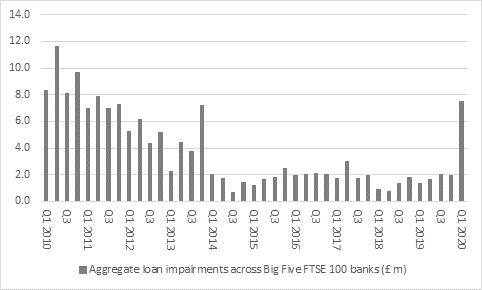 Moreover, the steepening of the yield curve, while welcome, could be another false dawn. The US Federal Reserve’s comments on Wednesday about the global economy and its plans for interest rates are dampening hopes of a recovery and could cap any further steepening of the yield curve, since the US central bank appears to have no intention of raising borrowing costs until 2023.

The long-term trend in headline interest rates has been down for the thick end of three decades and yield curves have been progressively flattened by central banks’ Quantitative Easing schemes and their efforts to manipulate borrowing costs, to make it easier for consumers and companies to take on fresh liabilities and use that credit as a lubricant for the brittle global economy.

Central banks never got round to withdrawing the QE stimulus applied after the Great Financial Crisis and attempts to raise interest rates proved short-lived, so it is hard to see why they should succeed this time around either, even if they have the inclination to try, as global levels of debt go ever higher. Record-low interest rates, crushed bond yields and narrow credit spreads make it very hard for banks to make money – and heaven help them if the Bank of England decides to experiment with negative interest rates. 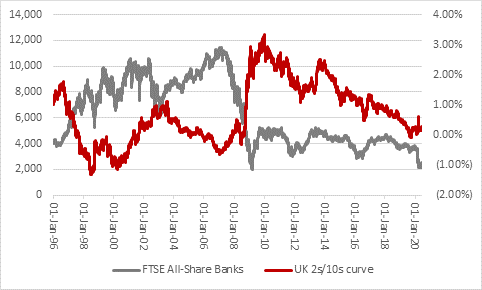 An additional complication is the political discomfort currently suffered by HBSC and Standard Chartered in Hong Kong and China. Both have publicly supported new Chinese security loans in Hong Kong, to try and maintain favour with local regulators, only to offend politicians and customer bases in the West. The Asian exposed pair have lagged.

Source: Refinitiv data to the close on Tuesday 10 June

It is indeed a grim time to be a bank. The one thing the banks have got going for them, from an investment perspective, is valuation. Their price/earnings ratios may not look attractive as near-term earnings are weighed down by fears of recession and higher credit losses, while dividends are temporarily off the agenda too – although analysts still seem to think the FTSE 100’s Big Five will look to declare and pay fourth-quarter dividends for 2020 in calendar 2021.

Their attraction from a valuation perspective lies with how they current trade at sizeable discounts to book, or net asset, value per share.

However, this could just be the market’s way of saying that returns on equity will remain meagre (and below the cost of equity) for some considerable time to come, thanks to a flaccid economy, huge global debts, the risk of increased bad loans and the margin pressure that unwittingly results from QE schemes.

END_OF_DOCUMENT_TOKEN_TO_BE_REPLACED
The value of your investments can go down as well as up and you may get back less than you originally invested. We don't offer advice, so it's important you understand the risks, if you're unsure please consult a suitably qualified financial adviser. Tax treatment depends on your individual circumstances and rules may change. Past performance is not a guide to future performance and some investments need to be held for the long term.