Johnson Matthey’s decision to cut its dividend – and in the process end a streak of increases that dates back to the late 1980s – means that 48 FTSE 100 firms have now announced some kind of reduction to or suspension of payments to shareholders, compared to 47 that have kept or increased them since the start of the year.

Five FTSE 100 firms – Ashtead, Auto Trader, DS Smith, Halma, National Grid - have yet to make a definitive statement on their intentions but pending their announcements, analysts believe total dividend payments from the FTSE 100 will drop by some 16% in 2020, on top of the estimated 11% drop in 2019.

That would take the FTSE 100’s total dividend payment down to £63 billion, the lowest figure since 2015. 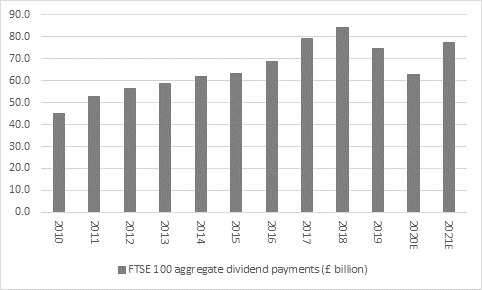 This can be seen two ways. Optimists will point to the resilience of dividend payments, as even a total drop of 25% from 2018 to 2020 – providing forecasts for this year prove accurate – could be an awful lot worse under the economic circumstances. Forty-seven ongoing or increased payments point to the resilience of some companies’ financial strength and business models - although some of those declared and paid out for the second half of 2019 before the viral outbreak took hold in the West, so their planned payments for the first and second halves of 2020 will be particularly interesting.

The more bearish view is that the forecasts for 2020 are simply too optimistic. A 16% dividend cut for 2020 does not seem much in the context of what the OECD forecasts will be the sharpest global economic downturn for a century. In addition, the fact that 48 cuts or deferrals against 47 decisions to hold or increase still translates into a 25%, two-year cut shows that the FTSE 100’s total dividend payment was reliant on a relatively low number of companies whose decisions had a disproportionate influence – the cuts from Shell, HSBC, Lloyds, BT and Imperial Tobacco and the deferral from Glencore had a particularly big impact on the overall forecasts.

Even now, the 10 biggest payers are expected to generate 54% of total dividends in 2020 and the top 20 some 73% of the forecast total. Any investor buying UK equities for their yield, either through individual stocks or a tracker fund, needs to make sure they are aware of this concentration risk and carry out detailed research on these 20 names in particular.

They also need to be aware that the forecast pay-out ratio of 69% is high and its mathematical obverse – earnings cover for the dividend – is lower than ideal at 1.44 times. The ideal is a pay-out ratio of 50% for earnings cover of 2.00 times. A longer-than-expected economic downturn could therefore place further pressure on dividend payments as profits and cash flows are squeezed further.

High pay-out ratios and low cover are particularly noticeable at the highest yielders, even if some allowances can be made for the relative stability of some firms’ business models or the solidity of their cash flows and balance sheets.

Ten Highest and Lowest yielding stocks in the FTSE 100, 2020E

Source: Company accounts. 48 FTSE firms have cut, suspended, deferred or cancelled payments, 47 have retained or increased them, five have yet to comment and two (Just Eat Takeaway and Ocado) do not pay dividends. The total is 102 because both Admiral and Morrison paid ordinary dividends but deferred or cancelled special dividends so they both feature twice.

END_OF_DOCUMENT_TOKEN_TO_BE_REPLACED
The value of your investments can go down as well as up and you may get back less than you originally invested. We don't offer advice, so it's important you understand the risks, if you're unsure please consult a suitably qualified financial adviser. Tax treatment depends on your individual circumstances and rules may change. Past performance is not a guide to future performance and some investments need to be held for the long term.