“It seems hard to believe now but at the start of the year analysts were expecting Card Factory to pay out a total dividend of 14.3p a share and offer a dividend yield of more than 10% on the share price at the time,” says Russ Mould, AJ Bell Investment Director.

“Instead, the company has become the first major UK firm to announce a hat-trick of dividend cuts – the 5p-a-share special went after January’s profit warning, the anticipated 6.4p-a-share final payment was culled alongside March’s COVID-related trading update and the company is now saying it does not expect to make any distributions of any kind for the fiscal year to January 2021. 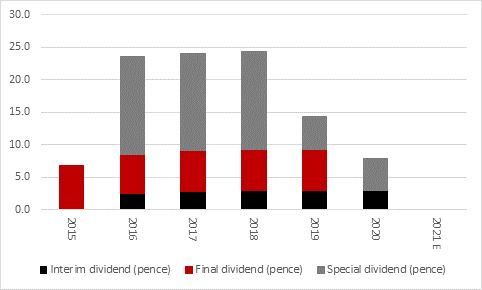 “Investors must now decide whether one implication of the viral outbreak is a long-term drop in High Street footfall and a sustained shift away from greetings cards toward digital forms of communication. If so, this may simply further accelerate trends that had already been developing at speed and mean that Card Factory needs to get its cardfactory.co.uk and gettingpersonal.co.uk websites right, after initial teething troubles, to compensate for what could be lost revenues in its core estate of stores.

“The full-year results to January did not offer a huge amount of encouragement but the results under lockdown give greater grounds for hope to CEO Karen Hubbard and team and the shareholders who are supporting her. In the new fiscal year to date, like-for-like sales at www.cardfactory.co.uk are up 302% and gettingpersonal.co.uk up 68% like-for-like. A successful relaunch of the www.cardfactory.co.uk site will therefore be critical, especially as the company is going to the expense of a second warehouse in Wakefield to both facilitate orders and maintain social distancing for the staff who work there.

“The prospect of reopening the High Street and that website refresh help to explain why the shares are up some 40% from their May all-time lows, although they still trade a long way below their 2014 flotation price. 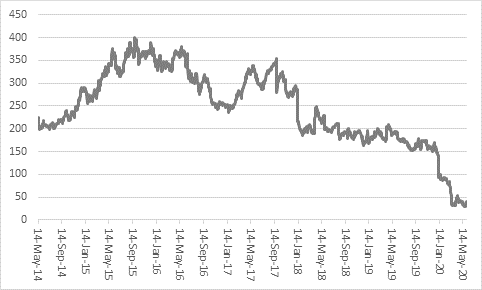 “A successful website relaunch would support the company’s claim that it can adapt to a multi-channel world continue to provide customers by selling affordable greetings cards, wrapping and gifts to its customers.

“Sceptics will counter that the simple art of remembering someone’s special day with a posted card or even a gift-wrapped present could be forgotten in the event of a sustained economic downturn even once the lockdown begins to lift. An even greater enemy could be the ruinous cost of a first-class stamp at 76p for a letter or card that weighs up to 100g. Such an expense may tempt many to reach for the emojis, an Instagram story or TikTok instead.

“The good news is that Card Factory’s net debt position of £142 million looks manageable in the context of £222 million in shareholders’ funds (for a gearing ratio of 63%) and interest cover of more than eight times also appears healthy.

“However, Card Factory does have lease liabilities of £146 million on its balance sheet and paying those leases on the store estate took £41 million of cash out of the door – not far short of the £48.5 million cost of the now-cancelled 5p-a-share special dividend and originally anticipated 9.3p-a-share ordinary, full-year payment.

“No-one knows how fiscal 2021 will turn out, especially as Card Factory is opening just 10% its shops on 15 June to test the waters. But profits and cash flow had been coming under pressure for some time before the outbreak and lockdown, so investors will ultimately want to see the company offer them some form of dividend to help to compensate themselves for the considerable risk associated with owning the shares, given the potential threats that face the core business model and the as-yet relatively unproven nature of its online response.”

Reopening rally: is there more to go?

The opening of indoor hospitality on 17 May was the penultimate step on the Government’s roadmap towards the complete removal of restrictions on 21 June,...

“After a late bounce on Thursday the FTSE 100 was just struggling to stay afloat on Friday morning as investors continue to navigate turbulent and...

Shares in numerous retailers are flying high after upgrading earnings guidance or on relief they have come through the other side of the Covid crisis....

Greeting cards and gifts retailer Card Factory said its performance following the reopening of stores in England and Wales from 12 April 2021 had exceeded...

How Taiwan Semiconductor became the most valuable emerging markets company