RBS rounds off a rotten week for the Big Five banks

RBS rounds off a rotten week for the Big Five banks One of the very few things that RBS’ first-quarter results have going for them is that it was the last bank of the Big Five to report, so their ability to shock or surprise was much more limited. The pattern of higher bad loan provisions, falling net interest margins and plunging profits had already been set by HSBC, Barclays, Standard Chartered and Lloyds, although investors in RBS can at least draw some comfort from its strong capital base, as reflected by a 16.3% common equity Tier 1 (CET1) ratio, the highest figure among the FTSE 100’s lenders. 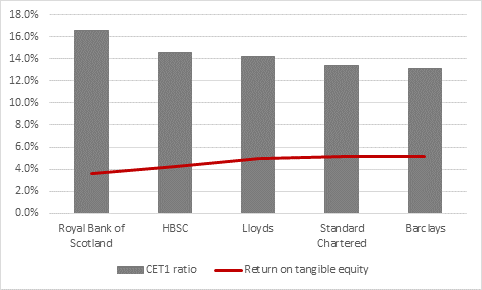 Other than that, there was little cheer on offer, as the Covid-19 outbreak and its knock-on economic effects overshadow the absence of litigation costs. RBS booked nothing at all here and between them Barclays, HSBC, Lloyds, Standard Chartered and RBS lost just £84 million to regulatory and conduct issues, the lowest figure since Q1 2014 and second-lowest since Lloyds first took a Payment Protection Insurance compensation claim charge way back in 2011. 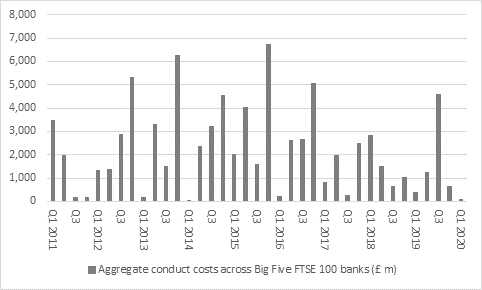 This would have normally given the profit and loss account a tidy boost but higher provisions for bad loans have swamped that benefit. RBS booked £802 million in loan impairments, the biggest charge since Q4 2013.

In total the Big Five banks took £7.5 billion in provisions for loan losses between them in Q1. 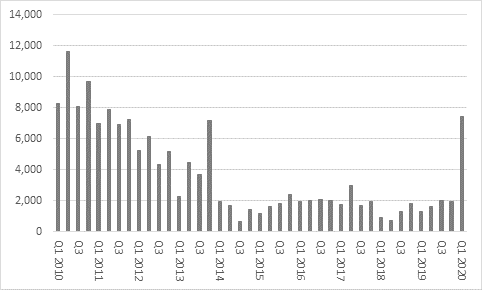 The good news is that was nowhere near the $24bn swallowed by America’s four giant Main Street lenders, Bank of America, Citigroup, JP Morgan and Wells Fargo and here the UK firms may have been helped by the leeway granted by the Prudential Regulatory Authority with regards to the IFRS9 accounting standard, which means the banks do not face an immediate requirement to book hefty losses against loans impacted by the viral outbreak. However, this does beg the question of whether there are further losses coming down the line for the Big Five, despite their rigorous tests and scenario analyses, even if they are mercifully a long way from the run rate needed to match the £57 billion in loan and credit impairments booked in 2009. 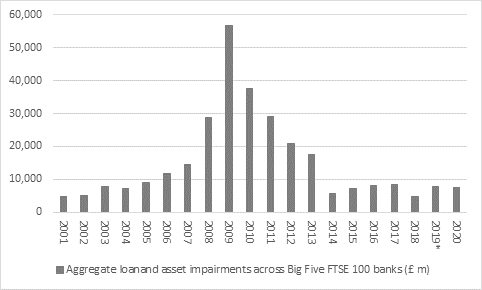 The bad news is that the £6.2 billion increase in loan impairments across the FTSE 100 banks helped to drive aggregate pre-tax income down by £5.1 billion, or 52%. 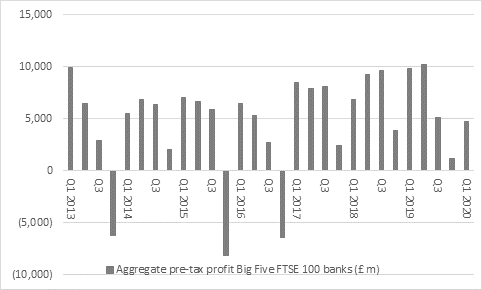 Lower conduct and restructuring costs provided some support but another key drag was pressure on net interest margins. Central bank cuts to headline interest rates, as well as their efforts to manipulate yield curves and credit spreads, mean it is getting harder and harder for banks to make a return on their loan book, especially as challenger banks are still snapping at their heels for business. All five of the FTSE firms showed an erosion of net interest margins and although the average drop of 16 basis points (or sixteen one-hundredths of one percent) does not sound like much, even that adds up pretty quickly across loan books that stood in total at £2.2 trillion by the end of March.

Higher loan charges and lower margins forced that 52% plunge in profits and therefore drops in return on equity too. And the meagre returns on equity on offer help to explain why all of the Big Five FTSE 100 banks trade at a discount to the last stated net asset, or book, value per share figures.

For the banks to prove that their shares are oversold, this will be the figure that they need to improve above all others, although a resumption of dividend payments once regulators and economic circumstances permit would be a boost for sentiment, too.

END_OF_DOCUMENT_TOKEN_TO_BE_REPLACED
The value of your investments can go down as well as up and you may get back less than you originally invested. We don't offer advice, so it's important you understand the risks, if you're unsure please consult a suitably qualified financial adviser. Tax treatment depends on your individual circumstances and rules may change. Past performance is not a guide to future performance and some investments need to be held for the long term.