Pugnacious comments about how much cash and liquidity it had at hand in both of its March trading updates on the impact of COVID-19 on its operations had seemed to suggest that Shell, just like BP, was preparing to dig in and defend its dividend. But the combination of near-term concerns over weak oil prices and long-term worries over demand for hydrocarbons and the risk of being left with stranded assets has forced Shell’s hand and chief executive Ben van Beurden and the board have sanctioned a two-thirds cut in the first-quarter payment. 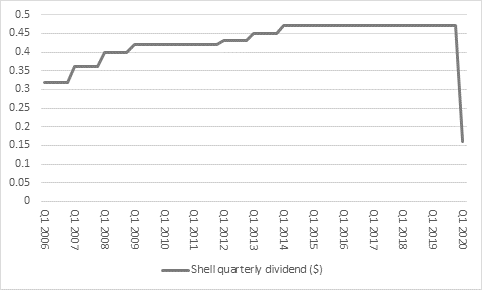 Shareholders will have been hoping that Shell followed BP’s path in trying to tough out 2020’s slump in oil prices as they are now left holding paper that yields around 3.5%, not 10%-plus, assuming four quarters of 16 cents rather than 47 cents a share in dividends.

The irony is that free cash flow comfortably covered the old $0.47-a-share dividend payment in the first quarter and did so for the eighth time in nine quarter. However, oil and gas prices have since gone down and Shell was unlikely to able to put such a squeeze on net working capital on a consistent basis.

Investors will now have to console themselves with the thought that the oil major has avoided doing long-term damage to itself in an effort to defend the short-term dividend payments. Cost cuts, reductions in capital expenditure and asset sales are all patch fixes to support cash flow and a dividend – and this is the playbook that served Shell so well during the oil price slump of 2015-16 – but they all potentially weaken a business over the long term, by crimping investment in its products, services and competitive position.

Taking on debt of top of that would again perhaps provide short-term dividend gain but in exchange for long-term pain, in the form of interest payments that suck away cash which could otherwise be used to invest in the company’s primary purpose and proposition.

And the Shell board will be well aware that the company’s net debt position has surged from $1 billion in 2005 to $73 billion today, thanks in part to acquisitions (notably BG in 2015), $153 billion in dividends and $48 billion in share buybacks over that 15-year period. That could not carry on for much longer. 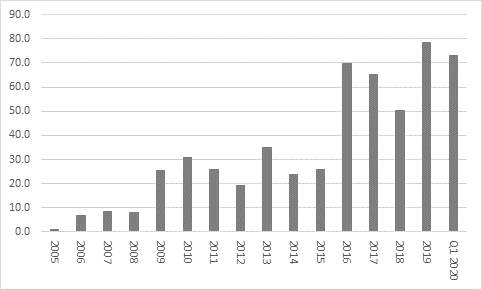 Shell’s cut is also a blow to those investors who have exposure to the wider UK equity market perhaps through funds or collectives rather than individual stocks.

In 2019, Shell was the single-largest dividend payer in the FTSE 100, a crown it is now likely to pass to BP in 2020 – although if its fellow oil major also cracks on the dividend front then British American Tobacco would top the dividend payment tables, especially after CEO Jack Bowles’ declaration on Thursday that the firm will stick to its plan to pay out 65% of profits as dividends this year.

Shell’s dividend cut also begs the question of how low could the FTSE 100’s aggregate dividend payment go. The end of Shell’s payment streak and Next’s shift on Wednesday from reliable supplier of ordinary dividends, and even special ones and share buybacks, shows that few dividends can be seen as entirely safe, although the recent soothing statements from consumer staples suppliers like Diageo, Reckitt Benckiser, British American Tobacco and Unilever suggest they may be among the safer options.

There are too many variables to give any forecasts on aggregate FTSE 100 dividends with conviction for 2020 especially as over 40 companies in the index have now cut, deferred, suspended or cancelled a payment for 2019 or 2020.

Then the FTSE 100’s aggregate, bottom-up dividend forecasts currently comes out at around £54 billion, down from £75 billion in 2019 (excluding special dividends). That is enough for a dividend yield of 3.3% - nowhere near the 5%-plus indicated by analysts’ forecasts and company guidance before the Covid-19 crisis. It is still a lot better than the 0.1% Bank of England base rate or the 0.29% 10-year Gilt yield, although it comes with capital risk and the danger that more dividends fall to economic circumstance or political or regulatory pressure – firms that have accepted Government aid of any kind, in the form of business rates or VAT relief or the furlough scheme will have to tread carefully as taking taxpayer’s money with one hand and giving cash to investors with another is not a good look.

If – and it is a big if with lots of maybes along the way – if that £54 billion figure proves accurate, then just 20 firms will pay out the vast bulk of it, assuming they meet analysts’ forecasts.

For more information on UK-listed companies which have cut, suspended, or deferred dividend payments, take a look at our Dividend tracker.

END_OF_DOCUMENT_TOKEN_TO_BE_REPLACED
The value of your investments can go down as well as up and you may get back less than you originally invested. We don't offer advice, so it's important you understand the risks, if you're unsure please consult a suitably qualified financial adviser. Tax treatment depends on your individual circumstances and rules may change. Past performance is not a guide to future performance and some investments need to be held for the long term.