“No-one knows for sure whether this week’s spectacular rally is a sign that the bottom is in or the first of a series of vicious traps during a prolonged bear market but one chart makes it easy to understand why investors are looking at financial assets once more,” says Russ Mould, AJ Bell Investment Director.

“Thanks to its latest interventions in the interbank funding, or repo, markets and launch of a fourth, unlimited round of Quantitative Easing, the US Federal Reserve’s balance sheet has swollen by a fifth in just two weeks to $5.2 trillion. That also means the central bank’s assets are a third higher than they were a year ago. 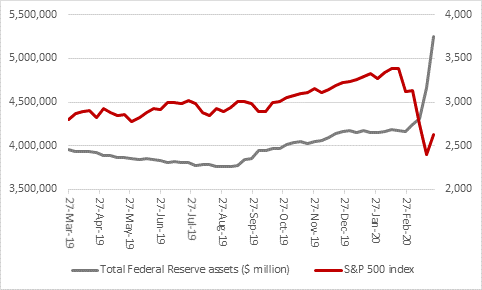 “This matches the rate of growth witnessed in late 2013 and early 2014 (after the Fed had been running QE-3 at a rate of $85 billion a month for over a year) and follows the path of QE-1 back in late 2009 when the Fed’s balance sheet swiftly doubled.

“It took some time but eventually the cheap liquidity provided by the Fed began to look for a home and it did so in the financial markets, because interest rates on cash and bond yields felt so low (and they are even lower now). 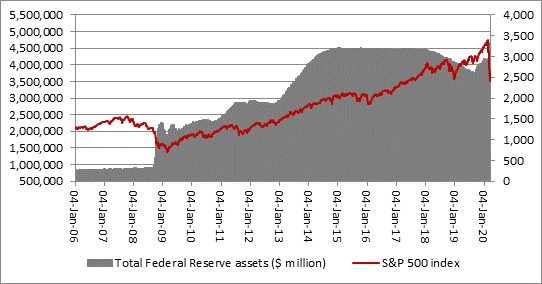 “It seems logical to expect financial assets to respond to this tidal wave of liquidity at some stage, too. Granted, valuations are much higher now than they were back in 2009, looking at ratios such as market-cap-to-GDP and the Shiller cyclically-adjusted-price-earnings (CAPE) multiple and the news on the economy and earnings are likely to get worse before they get better.

“But once news flow stops deteriorating and confidence returns – as it surely shall – then watch out because the Fed’s liquidity gusher could easily create a bubble that would make those of 1998-2000, 2005-07 and 2018-20 look like small potatoes by comparison, if the monetary authorities are not careful. And on the basis of what we saw in the 2010s the odds on central banks being bold enough to withdraw stimulus once it is no longer needed are somewhere between nil and slim – and Slim just left town, as the old saying goes.”

END_OF_DOCUMENT_TOKEN_TO_BE_REPLACED
The value of your investments can go down as well as up and you may get back less than you originally invested. We don't offer advice, so it's important you understand the risks, if you're unsure please consult a suitably qualified financial adviser. Tax treatment depends on your individual circumstances and rules may change. Past performance is not a guide to future performance and some investments need to be held for the long term.