Virgin Money UK suspended dividend payments late last year thanks to a final rush of Payment Protection Insurance (PPI) compensation claims and Secure Trust Bank is now the first lender to pass its shareholder distribution thanks to concerns over the economic impact of the COVID-19 outbreak.

Secure Trust’s move to cancel its final dividend saves it around £12 million and its strategy will raise the question in investors’ mind of whether other challenger banks need to take this step, or even whether the FTSE 100’s Big Five will have to follow, too.

Paragon Banking Group’s 2019 dividend payment came to around £54 million and consensus analysts’ forecasts have the newly-enlarged OneSavings Bank handing over around £72 million.

But those numbers pale compared to the distributions offered by Barclays, HSBC, Lloyds, RBS and Standard Chartered between them in 2019. Including RBS’s 17p-a-share in special dividends, the Big Five handed over £15.3 billion in dividend payments to their shareholders, a figure which exceeded the amount paid in 2007, just before the financial crisis. 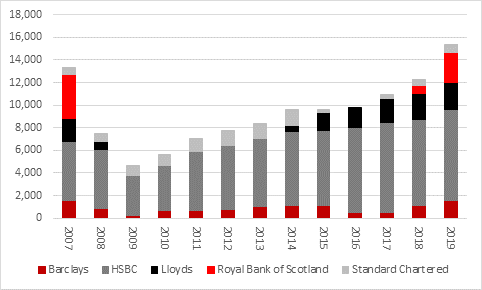 The big banks have all passed the Bank of England’s stress tests (which have been cancelled for 2020 anyway) and been given more breathing room by regulators with regard to how much regulatory capital they have to hold.

But this is a tough environment to be a bank for many reasons. Interest rates are anchored at or near zero, net interest margins are under pressure and now consumers and corporates alike are fearing for their income and cash flows, raising the prospect of sour loans – although the chances of banks being permitted to pull the plug may be pretty low, given that the Government and Bank of England are trying everything they can to lessen the hit from the COVID-19 lockdown on the economy.

That’s a pretty unpleasant combination and one which could easily hit earnings – and that’s before the downturn, at least in the short term, by the investment banking operations of Barclays and HSBC.

But even if banks are able to weather the economic storm, pressure could build on their dividends from a different source, namely their customers and the Government.

The Bank of England’s Bankstats dataset shows that the gross revenue receivable generated by the UK banking sector from interest paid on debt by consumers and companies is around £28bn per quarter on a total loan balance of around £1.9 trillion.

The permanent scrapping of interest payments for three months would mean a loss of income and capital for the banks – but suspending dividend payments could cover more than half of the balance sheet hit for the big five banks.

Scrapping interest payments for six months would bring massive relief to families, ease fears of insolvency in boardrooms, take pressure of employers to lay off staff and ease the burden on the public purse, which is currently being lined up to subsidise the wages of furloughed employees, at least up to a certain limit.

And while six months sounds like a long time for the banks, a £56 billion interest income hit would represent a provision against the loan book of just 3%. The alternative of potentially letting some businesses collapse would surely entail far greater losses on the loan books.

From a stock market perspective, the loss of income would be uncomfortable, especially as the quintet of banks generated 17% of estimated FTSE 100 dividend income between them in 2019.

But heavy share price falls are probably already discounting cuts – at the very least an end to share buybacks and special dividends – and a £56 billion write down would only scrub 12% off the aggregate £455 billion in risk capital held by the banking system. That is a lot, but share prices are already down by a lot more than 12% and they would probably see such an outcome as a relatively good result.

Politically the plan is an easy sell, as well, since the dividend cancellation and debt forbearance plans could be pitched as the banks returning the favour that the public did for them with the bail-outs that came after the Great Financial Crisis (even if it must be said that neither Barclays nor HSBC nor Standard Chartered actually accepted any bail-out cash in 2008-09).

Banks’ shares have already fallen a long, long way. The meaty dividend yields, using 2019 payments as the basis, look juicy but could prove misleading should either a deep recession or public pressure build.

A better way to judge whether they have fallen far enough – or even too far – is to look at their share prices relative to book value.

Such lowly valuations relative to book value imply that returns on equity will come in consistently below the cost of equity for many years to come. This is by no means totally impossible in an indebted West that may be slowly turning Japanese as it falls into a liquidity trap where interest rates are anchored near zero and Quantitative Easing is the norm and not the exception.

But such considerations may be pushed aside, at least temporarily, if the near-term hit to the banks’ dividends and capital stock is one that they take willingly to help out the greater good and in the process perhaps rein in some of the damage they may have suffered anyway during what is widely seen as a certain imminent downturn.

END_OF_DOCUMENT_TOKEN_TO_BE_REPLACED
The value of your investments can go down as well as up and you may get back less than you originally invested. We don't offer advice, so it's important you understand the risks, if you're unsure please consult a suitably qualified financial adviser. Tax treatment depends on your individual circumstances and rules may change. Past performance is not a guide to future performance and some investments need to be held for the long term.