One of the most confusing features of the current market rout is gold’s failure to confirm its status as a haven asset during times of trouble. The precious metal is unchanged since the start of the year and is down by nearly 10% from the year high reached on 24 February when investors first began to sense that the COVID-19 was much more serious than they had initially thought.

One common theory to explain gold’s slump is that investors are looking to meet redemptions or margin calls and the precious metal is a logical port of call, especially as many investors will have a profit to take and the gold market is relatively liquid.

This makes sense, especially as the same happened to gold when all hell broke loose in 2008. 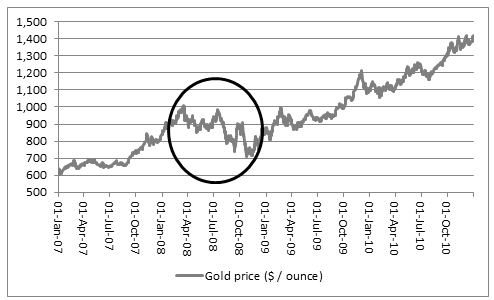 As the recession deepened and stock markets tumbled, gold was dragged down as professional and private investors alike had to meet margin calls, settle fund redemptions or simply rustle up ready cash. Gold had surged from its 2001 lows in the $250-to-$260-an-ounce range to $1,012 by March 2008.

As US equities flirted with a bear market, gold looked like a rich source of cash, especially as there were still profits to be taken.

By this time, then Treasury Secretary Hank Paulson had launched the $700 billion Troubled Asset Relief Program (TARP), the Fed had launched its first round of Quantitative Easing in November 2008 and US interest rates were heading to 0.25%.

The newly-established Obama administration then signed the $787 billion American Recovery and Reinvestment Act into law in February 2009 and the combination of huge monetary stimulus and huge fiscal stimulus gave gold an equally huge boost. Investors sought a haven as the authorities fought to take control of events, whatever the cost.

The Fed ultimately held interest rates at 0.25% for seven years and followed up with two more rounds of Quantitative Easing, in November 2010 and November 2012. 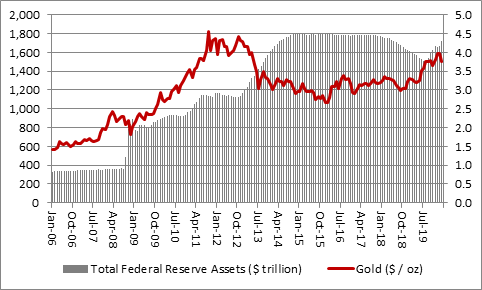 It was only when the US economy really found momentum in 2011-12 and investors took the view that the European Central Bank had the Eurozone debt crisis in hand thanks to its rate cuts, QE schemes and Mario Draghi’s promise to ‘do whatever it takes’ that gold lost its appeal as investors took fresh confidence in policy and markets.

There are therefore quite a few parallels between 2008 and now – even if the cause of the upset this time is very different.

The Fed has already worked its way through a long list of policy measures – interest rate cuts, more QE, provision of liquidity to interbank lending markets and the exchange of collateral from brokers for cash. Central banks have cut interest rates 57 times between them worldwide in 2020. And UK, France, Italy, Hong Kong and others have launched fiscal stimulus packages, with the US not far behind.

If these prove to be enough to support the global economy, gold may stay out of favour and, ironically, remain a source of ready cash as financial markets stay unsettled. But if more unorthodox policy is needed, and more ‘money’ is conjured out of thin air via negative interest rates, QE, helicopter money or increased Government deficits, investors could yet return to the precious metal, just as they did from late 2008 to summer 2011, when gold peaked at almost $1,900 an ounce.

After all, the flatter the US yield curve has become, the better gold has done. And a flatter yield curve (the gap between the interest rate on the two- and ten-year US Treasury bonds) generally warns of a downturn ahead so if markets fear the authorities are still behind the curve, literally and figuratively, then gold yet rally to please its fans and confound those who still dismiss it as a relic of a bygone age. 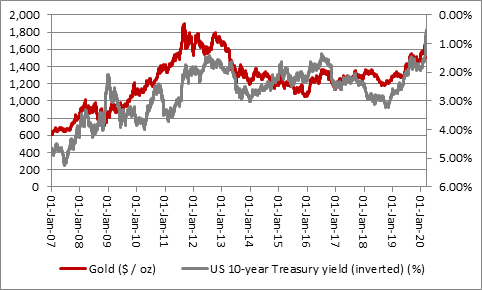