The market sell-off in context

The market sell-off in context On Thursday 12 March, the FTSE 100 index fell by over 10% – the largest single-day move since the financial crisis of 1987. It is impossible not to look at the moves and be tempted to sell, especially when your falling portfolio makes your next holiday, or even your retirement, look a little further away.

In our last video update we discussed that things may get worse before they get better. Indeed, we are not medical experts and do not try and pretend we fully understand how the pandemic will spread, or how long it will take to be brought under control. The short-term economic consequences are also unknown, with many small and medium businesses facing cash flow issues, and even large businesses that are heavily indebted and operating on small profit margins coming under pressure.

The news flow has certainly worsened, and the situation has become real for many – either directly through infection or indirectly through event cancellation, empty supermarkets or employment uncertainty. Stock markets have continued to move sharply – both downwards and upwards as they react to WHO updates, central bank actions and any other available data. It is certainly fair to say that we are in unprecedented territory, and it is the fear of the unknown that is causing the big market moves.

It is human nature to forget the bad times and remember the good – however, it is certainly not the first time and won’t be the last that we see similar market moves.

Since 1980 we have witnessed a number of epidemics. 1981 saw the outbreak of AIDS, 1994 saw the Pneumonic Plague hit India, and as we moved into the new millennium a number of respiratory illnesses took hold: SARS in 2003, Bird Flu in 2006, Swine Flu in 2009 and MERS in 2013. Other recent outbreaks have included Dengue Fever, Measles, Cholera, Ebola and Zika.

Additionally, we have seen a number of other shocks to markets. Alongside the financial crisis of 2008, we experienced the dotcom bubble in 2000, the attack on the Twin Towers in 2001, Black Monday in 1987, the Japanese earthquake in 2011 and more recently the surprise EU referendum outcome in 2016 – to name a few.

However, in the end, all these crises have been short lived. The below chart shows the monthly performance of the MSCI World Index (a measure of developed countries), measured in sterling from 1 January 1980 to 31 December 2019. Its total return over the period has been over 6000%. 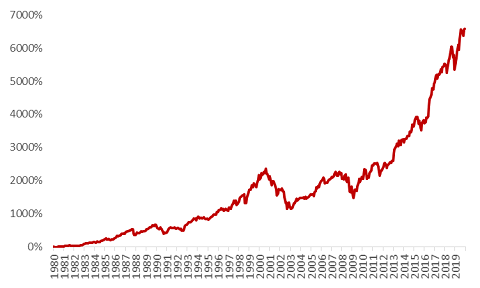 Putting this into context:

Of course, this time could be different – but our central case is that the market has faced issues like this before. 2008 was seen as the end of the financial system, yet by 2010 the index had recovered. During a crisis, it is often harder to look at the longer-term picture. However, unless this crisis brings consequences that last a number of years, once again we think the world will eventually move on.

Our funds are designed to be held for the long term. This policy is based on our previous experience of markets – time is an investor’s best friend. Often the best course of action is to remain calm while others are panicking, which is why over the last couple of weeks we have left the fund positions largely unchanged.

Don’t put all your eggs in one basket

AJ Bell operates a range of eight funds. Six of these are targeted towards long-term growth, and two towards income generation.

The difference between each of these funds is in the level of risk we take. The Cautious fund predominantly holds bonds and cash, with smaller holdings in shares. Moving up the risk scale we finally get to the Global Growth fund, which predominantly holds shares. Each fund invests across different sectors and regions. By using index-based investments, we are not concentrated in single companies. This means, at times of uncertainty, some parts of the portfolio will do better than others. The aim of blending all these different types of investments together is to dampen losses.

Bonds tend to fall less (or even increase in value) as they are seen as safe havens, while shares tend to fall due to uncertainty around future prospects. However, even within shares the level of losses will vary. A utilities company providing electricity faces less uncertainty than, say, a company operating high street clothes shops, and as such, will often fall by less.

At AJ Bell, we don’t wait until a crisis to ensure we are happy with our positioning. Instead, we try and ensure we have the right blend before the event. This doesn’t mean the AJ Bell funds won’t go down in value, because ultimately they remain invested in the markets, but we do try and minimise losses where possible. The Cautious fund typically falls by less than, say, the Global Growth fund, because of its higher exposure to shares.

We review our mix of holdings constantly, and where practical will make changes where appropriate to ensure we’ve spread out the risk as much as possible. However, in current markets, it is much more expensive to trade than normal, and we don’t see the benefit of making wholesale changes at this point.

Our key mantra at AJ Bell is to never forget whose money it is. We have plans in place to continue to run the funds as normal through any outbreak, allowing you to focus on more important issues such as looking after yourself and your family.

Matt Brennan is Head of Passive Portfolios at AJ Bell and is responsible for the day-to-day running of the AJ Bell funds. He has over six years’ experience in financial services, having previously worked at Brown Shipley as a Senior Fund Manager and Head of Fixed Income Research, with specific responsibility for managing a discretionary fixed income fund. He also formed part of a four-person fund management team that ran the company’s multi-asset funds. Matt graduated from the University of York with a first class Masters degree in Mathematics, and is a CFA Charter holder.

END_OF_DOCUMENT_TOKEN_TO_BE_REPLACED
The value of your investments can go down as well as up and you may get back less than you originally invested. We don't offer advice, so it's important you understand the risks, if you're unsure please consult a suitably qualified financial adviser. Tax treatment depends on your individual circumstances and rules may change. Past performance is not a guide to future performance and some investments need to be held for the long term.