“Banking stocks are giving the Bank of England’s emergency rate cut a guarded welcome, with small gains across the board, and the biggest gains coming from those with the greatest exposure to the mortgage market as a percentage of their business, such as OneSavings Bank and Lloyds” says Russ Mould, AJ Bell Investment Director.

"The rate cut may give some succour to borrowers, especially those who encounter any cash flow problems thanks to the coronavirus outbreak, but perversely it may do as much long-term harm to lenders as it does good.

“At its core, banking is simple stuff. A bank raises funds at one interest rate (by collecting deposits from customers or raising cash from wholesale markets and other banks) and then lends that money out at a higher rate, ideally to someone who can meet the interest bills on time and ultimately repay the loan. The difference between the rate at which funds are obtained and loaned is the all-important net interest margin and the core to many banks’ profits.

“But here lies the rub. Net interest margins have been grinding lower at the big FTSE 100 banks that have substantial UK exposure and although competition has a part to play here, especially in the mortgage market, banks really need three things to make a healthy return.

“All three are missing at the moment. This explains by return on tangible equity targets are being missed; the stocks trade at or on a discount to net asset value; and the shares are performing terribly.

“Nor is this a new trend. The FTSE All-Share Banks index has been anchored by even-ever flattening yield curve for some time, as central banks have cut headline interest rates and tried to lower costs for borrowers. This is good for borrowers, bad for banks. 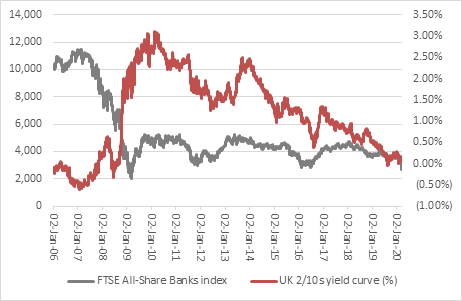 “Nor should this really be a surprise. Japan has been trying zero or negative interest rates or QE programmes for the thick end of 30 years in response to the collapse of its debt-fuelled property and stock market bubble in 1989. Since the peak, the Topix Banks index is down 92%.

“The FTSE All-Share Banks index peaked in June 2007, just as a debt-fuelled property and stock market surge was about to pop in the West. Since then, it has fallen by 75%.

“A comparison of the Topix Banks index since 1998, when the boom was in full swing, and the FTSE All-Share banks index since the start of 2006 (giving the UK index the same starting point), makes for sober viewing. It suggests that the longer rates stay near zero and the yield curve stays flat the tougher life will stay for UK banking shares, if the Japanese experience is any guide. Central bankers and investors beware.” 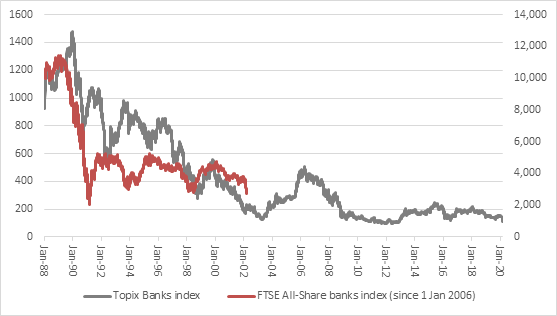 END_OF_DOCUMENT_TOKEN_TO_BE_REPLACED
The value of your investments can go down as well as up and you may get back less than you originally invested. We don't offer advice, so it's important you understand the risks, if you're unsure please consult a suitably qualified financial adviser. Tax treatment depends on your individual circumstances and rules may change. Past performance is not a guide to future performance and some investments need to be held for the long term.