“There is an old saying that ‘you can’t buck the market’ and Saudi Arabia is learning this twice over today, as the price of both oil and its national champion Aramco go through the floor, despite Riyadh’s best efforts to give them a helping hand,” says Russ Mould, AJ Bell Investment Director.

“But there are two other implications that can be drawn from oil’s price collapse, with regard to the oil industry and the global economy that could have a far greater knock-on effect that Aramco’s inability to hang on to the $2 trillion price tag so cherished by Saudi Arabia. Both could actually be good news rather than bad.”

1. Aramco and oil. You can’t buck the market.

“Aramco is now trading below its SAR 32 flotation price and oil is back at $31, despite Saudi Arabian efforts to support both. A string of OPEC production cutbacks that date back to December 2016 have ultimately failed in their attempts to hold up crude prices, despite Russian support. This partly reflects OPEC’s diminished influence, since it is now responsible for barely one-third of global oil output, but is could also be a product of the gathering pushback against the use of hydrocarbons and also fears of a demand-side shock thanks to the COVID-19 outbreak.

“OPEC’s failure to agree on fresh production cuts in Vienna last week is doubly worrying as the existing output reductions are due to expire in the first half of this year and that could bring a further 1.8 million barrels of oil back on to the market (1.2 million from OPEC and the rest from Russia). 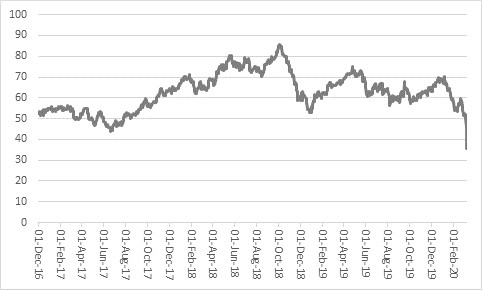 “It will now be interesting to see if the best cure for low oil prices proves to be a low oil price. Usually when the price of something goes down, demand goes up, although oil does seem to be relatively price inelastic. Demand rarely fluctuates by too much and it has only really stumbled thus century during the recessions of 2000-03 and 2007-09 and February’s monthly oil report from OPEC still has demand running ahead of supply. However, markets are clearly frightened of a demand-side shock that will take its toll on demand for crude, especially if the viral outbreak goes on for longer and proves more widespread than expected or hoped. 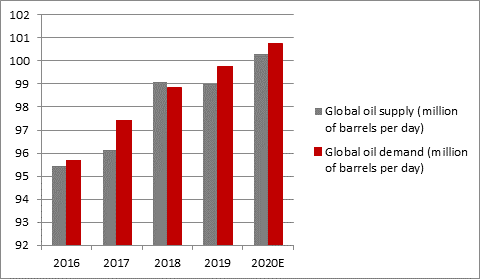 2. The market may just correct itself anyway

“The real irony for OPEC might just be that falling oil prices prove to be a better stabiliser for demand that attempts at setting supply in an artificial manner.

“Combined attempts by Russia and OPEC to hold supply off the market have been undone by growth in shale output in the USA. Since the first Vienna agreement in December 2016 to take 1.8 million barrels of supply off the market, US shale output has surged by four million barrels a day, reaching 9.2 million. Shale gas output has increased by 60% from the major Andarko, Appalachia, Bakken, Eagle Ford, Hayensville, Niobara and Permian fields.

“But the oil price bust of 2016 took a huge toll on the US shale drillers, many of whom are funded by junk bonds or expensive debt. That funding market closed quickly five years ago and as oil prices fell, start-up drillers went to the wall. If market risk appetite recedes again and oil prices stay weak, you would expect to see the same.

“The HaynesBoone Oil Patch Bankruptcy Monitor reveals that more than 100 shale drillers filed for bankruptcy filings in 2015-2016 when oil prices collapsed. That figure receded to 24 in 2017 and 42 in 2018 as crude gained ground. Forty-two firms fell by the wayside in 2019 and weak oil could do a lot of damage to a group of firms that are carrying $122 billion in debt – and further failures could help to bring some balance between demand and supply, by letting the market take its natural course, where OPEC and Russia have failed to influence the market by interfering with it. 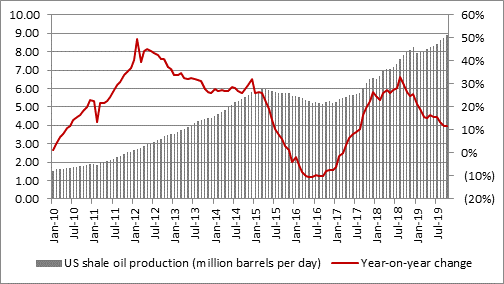 3. Why falling oil might be good and not bad news for the global economy

“It is understandable that markets are worried about a global demand-side shock from a prolonged COVID-19 outbreak, even if the number of fatalities worldwide is mercifully still way below the 13,000 caused by a severe ‘flu outbreak in the 2013 in the UK alone (and we all are hoping it stays that way). 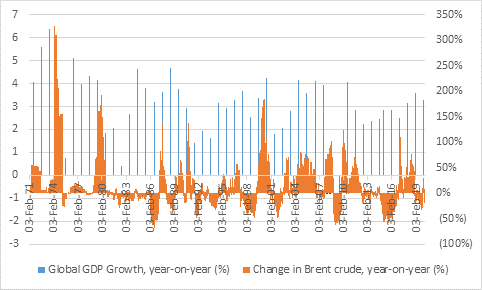 “In this context, today’s stock market collapse looks like a bit of a panicky (over)reaction, although a deep recession would raise big questions over forecasts for corporate earnings, cash flows, dividends and buyback schemes, as well as the mountain of debt that has built up worldwide since 2007 – according to the Institute of International Finance, global debt now stands at $255 trillion, some 60% higher than when the financial crisis started more than a decade ago.”

END_OF_DOCUMENT_TOKEN_TO_BE_REPLACED
The value of your investments can go down as well as up and you may get back less than you originally invested. We don't offer advice, so it's important you understand the risks, if you're unsure please consult a suitably qualified financial adviser. Tax treatment depends on your individual circumstances and rules may change. Past performance is not a guide to future performance and some investments need to be held for the long term.