“Central London-focused Derwent has generated increased rental income, reduced its vacancy rate, launched and quickly filled new developments and grown its net asset value per share, with the result that the company had added to its streak of consecutive increases in its annual dividend with a 10% hike. 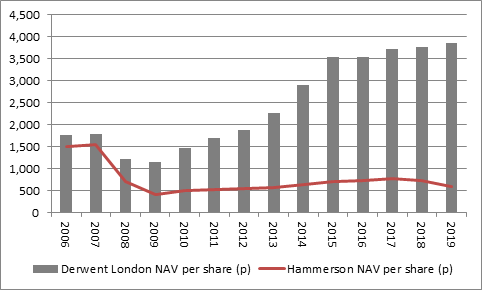 “Retail-focused Hammerson, with its broad geographic spread of properties in the UK and also Europe, unveiled a drop in rental income, a sharp drop in its net asset value per share, an ongoing commitment to asset disposals to help it reduce debt and a proposed cut in the dividend for 2020. 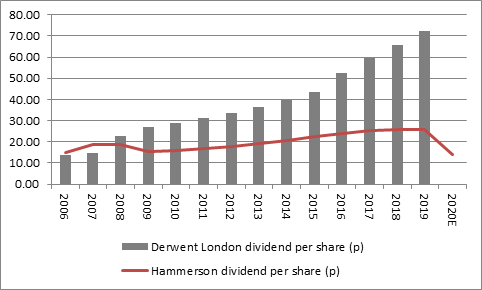 “The latest figures simply confirm trends that have been evident throughout this decade, as the trajectory in Derwent’s net asset value and dividend per share numbers have left those of Hammerson for dead, leading to a far superior capital gains and total returns from Derwent relative to Hammerson.

“The operational, financial and share price performance gaps reflect the different business mixes of the two REITs’ property portfolios, although Derwent has generally been a less risky option because it also has a lot less debt.

“Hammerson has thus far been primarily focused on retail, through its flagship sites such as Bicester Village, and its retail outlets and parks, across the UK, Ireland and selected parts of Europe. Derwent London has continued to develop its portfolio of sites in London’s West End and on the fringes of The City and maintained a much broader spread of tenants. According to the 2018 annual report, the media industry provided 29% of rental income, against 20% from professional services, 19% from retail head offices and12% from retail and leisure sites.

“Derwent has thus benefited from London’s status as a global city and the growth the nation’s capital has continued to generate since the Great Financial Crisis has come to an end. Hammerson, by contrast, has had to confront both the rise of internet shopping, and the damage that has done to its retail parks and outlets, as well as the less robust economic growth seen across the UK outside the M25 during the decade of post-crisis austerity.

“Hammerson is now looking to entirely exit the retail parks business and develop its City Quarters sites in London, Dublin and Bristol, which have potential for a combination of residential properties, hotels and workspace for businesses.

“This shift in mix probably cannot happen quick enough for shareholders whereas investors in Derwent will be looking to hear more about three ongoing developments in W1 and EC1 in London and potential projects at Baker Street and Holden House in W1, Bush House in WC2 and Blue Star House in SW9.

“At the moment, investors clearly feel they have more faith in the investment case for Derwent than for Hammerson. This is partly reflected in near- and long-term share price performance data but also the stocks’ respective valuations.

“Derwent now trades at a 9% premium to its historic net asset value per share figure, while Hammerson trades at a 63% discount.

“Even after the planned cut in the dividend to 14p per share, Hammerson still offers a 6.2% dividend yield for 2020, whereas Derwent offers a yield of just 1.8%. Investors are clearly demanding a higher yield to compensate themselves for what are seen to be the higher risks associated with owning the stock.

“Hammerson’s management team will be looking to demonstrate disposals, debt reduction and positive developments in the City Quarters projects to change perception and close that valuation gap.”

Markets dip on Fed disappointment and challenging corporate results, and Lloyds still has a pounding headache

END_OF_DOCUMENT_TOKEN_TO_BE_REPLACED
The value of your investments can go down as well as up and you may get back less than you originally invested. We don't offer advice, so it's important you understand the risks, if you're unsure please consult a suitably qualified financial adviser. Tax treatment depends on your individual circumstances and rules may change. Past performance is not a guide to future performance and some investments need to be held for the long term.