Not even the combination of a name change to NatWest Group, a meaty increase in the dividend and a laudable attempt to do its bit for the move toward a carbon-zero world can conceal how Royal Bank of Scotland’s profit outlook is a cautious one as the bank joins rival Barclays in pushing back when it hopes to meet its long-term profit goals.

RBS had already abandoned the 15% return on tangible equity target laid down by then-CEO Stephen Hester back in 2009 and had been aiming for 12% under Ross McEwan. But new boss Alison Rose has revised this figure to a range of 9% to 11% by 2021, thanks in part to regulatory pressures and costs associated with the downsizing of its investment bank. 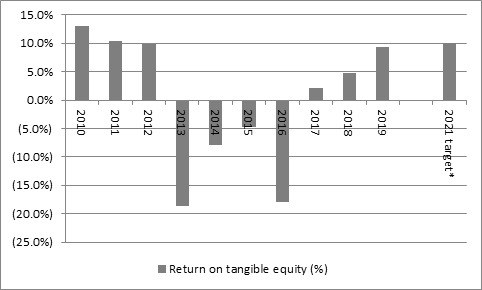 The overall economic environment is hardly helpful either, as growth remains sluggish and the world heavily indebted so finding new borrowers is not as easy as it sounds. Those consumers or corporations who are not heavy borrowers are not likely to need or want debt, while the most eager borrowers could conceivably be those who already have lots of liabilities and therefore represent a higher risk.

At least loan impairments remain relatively subdued at 0.21% of the loan book and loan losses tapered off a little in Q4, perhaps as a result of the tidal wave of interest rate cuts from central banks which swept over the world in the second half of 2019. 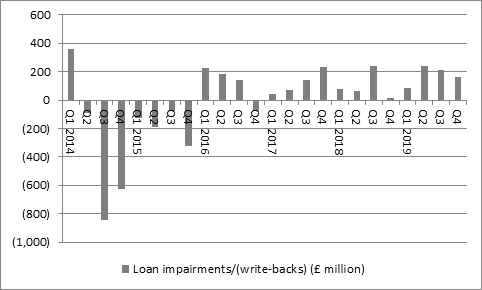 That suggests RBS will be pleased by those rate cuts, although the low-interest-rate environment is not as helpful as it may seem. To make a profit on their loan books, and record a decent net interest margin, banks ideally need positive interest rates, a steep yield curve and wide credit spreads. None of those is much in evidence today and that is why RBS’ net interest margin is still creeping lower – and this will be a key factor in Alison Rose’s reduced return on tangible equity target as it hits the core profitability of the bank. 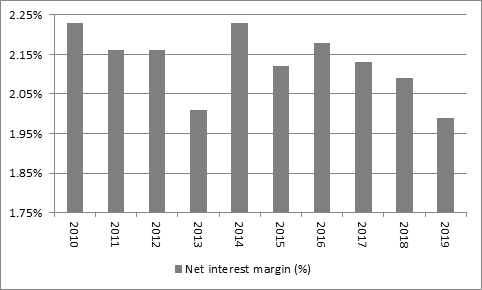 One way in which Alison Rose is looking to boost the quality as well as the quantity of RBS’ earnings is to downside the NatWest Markets investment bank. This contrasts markedly with Barclays’ ongoing commitment to its equivalent business, although Barclays is far more profitable in this area and Jes Staley and his team will be pleased to see another rival downsizing, as that is potentially one less competitor to worry about.

It is easy to see why Rose is looking to reduce RBS’ commitment to the investment bank. It lost £25 million at the operating level, thus contributing nothing to the group’s £4.2 billion profit, even though it hogged nearly a quarter of the group’s £179 billion of risk-weighted assets. 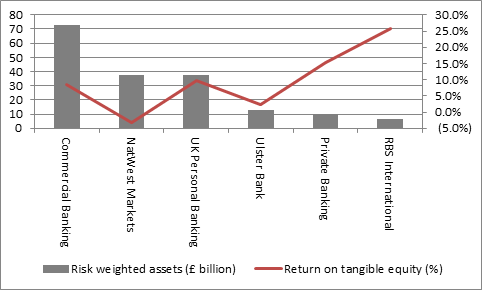 One source of comfort for investors could be the dividend. RBS has declared a final dividend of 3p and a special dividend of 5p, adding to the 2p and 12p payments offered at the half-year stage. That makes for a meaty 22p-a-share return in 2019 and analysts are forecasting a healthy increase in the regular payment in 2020 too. 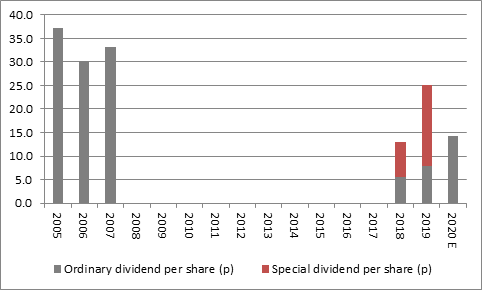 This means that RBS, like Barclays, may appeal to income- and value-hunters alike. Equally, like Barclays, the pressure on margins and scrapping of long-term profitability targets leaves both stocks without the sort of catalyst that could unlock the value that may be there. RBS trades on just 0.8 times historic book value, so investors are effectively buying its assets for 80p in the pound.

Perhaps Alison Rose’s cost-cutting drive will generate fresh interest but such programmes can only take you so far and cost-cutting a lower quality source of earnings growth than genuine increases in revenues.

Improved global growth outlook with a little inflation with some interest rate rises thrown in would help the top line and margins and that combination could be a big spark for shares in RBS (or NatWest Group as it will become). Unfortunately a lot of false starts for all three of those in the last decade mean that such a scenario looks unlikely, at least in the short term.

END_OF_DOCUMENT_TOKEN_TO_BE_REPLACED
The value of your investments can go down as well as up and you may get back less than you originally invested. We don't offer advice, so it's important you understand the risks, if you're unsure please consult a suitably qualified financial adviser. Tax treatment depends on your individual circumstances and rules may change. Past performance is not a guide to future performance and some investments need to be held for the long term.