Barclays admits it will not meet 2020 profitability target

Barclays admits it will not meet 2020 profitability target

“Just when closure on the PPI scandal could have bought Barclays some breathing room, the bank will now attract lurid headlines over the relationship between chief executive Jes Staley and disgraced American financier Jeffrey Epstein. But the real shocker in today’s full-year results is Barclays’ admission that it will not meet the 10% return on tangible equity target laid down by Mr Staley and CFO Tushar Morzaria for 2020,” says Russ Mould, AJ Bell Investment Director. 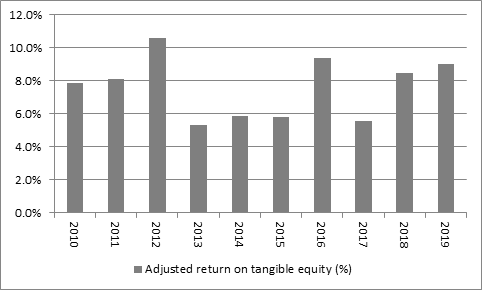 “While investment banking revenues rose 20% year-on-year in the fourth quarter and pre-tax income from corporate and investment banking rose to £359 million from just £85 million a year ago, activist Edward Bramson will still be able to point out that the investment bank made only a 7.6% (adjusted) return on tangible equity from its allocation of £25.9 billion, while the group overall made 9% on £46.6 billion. 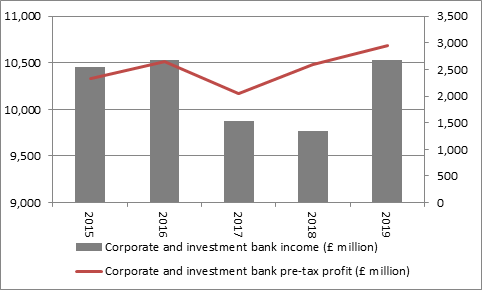 “Meanwhile, Barclays’ headline pre-tax profit figure of £4.4 billion including litigation and conduct costs and £6.2 billion excluding them shows what the bank could achieve if it can keep its nose clean. After an extra £1.8 billion of payment protection insurance (PPI) compensation payments, Barclays has now forked out £15.5 billion in conduct fines and costs since 2013. Throw in £16.2 billion of asset and loan write-downs and £4 billion in restructuring costs over the same period, and then these three items combined have knocked £32 billion off profits, when Barclays’ aggregate pre-tax income has been £16 billion and its dividend distributions have come to £5.4 billion. The upside potential is huge if those costs come down, especially as deposits and the loan book are growing again. 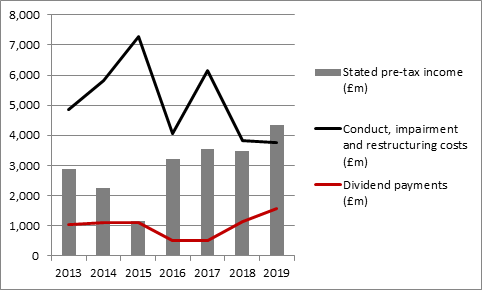 “However, the bad news is the overall backdrop is not helpful. Low or negative interest rates, flat yield curves and compressed credit spreads make it very hard for Barclays to earn a decent return on its loan book, as can be seen in the ongoing decline in the net interest margin at the UK operation. 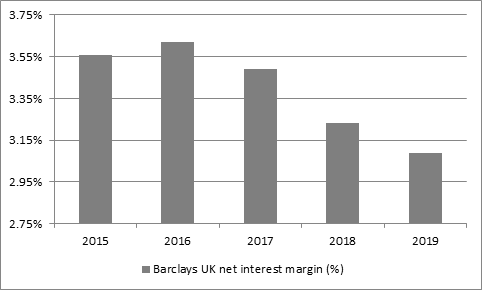 “The longer that interest rates and bond yields stay low, the harder it will be for Barclays to make a return on its loan book and meet the 10% (adjusted) return on tangible equity target.

“The failure to reach that level leaves Barclays shares bereft of a catalyst that could crystallise the value that may be there. A share price of 176p compares to the bank’s stated tangible net asset value per share figure of 262p, so investors are, in effect, paying 67p to buy ever £1 of the bank’s assets. 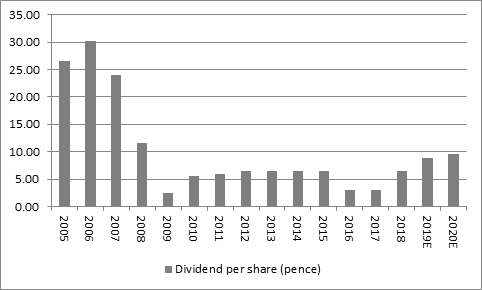 “A fresh intervention from Mr Bramson could perhaps provide a spark, although an improved global growth outlook with a little inflation and some interest rate rises thrown in would perhaps be the best thing that could happen to Barclays’ shares – unlikely as perhaps that may seem at the moment.

END_OF_DOCUMENT_TOKEN_TO_BE_REPLACED
The value of your investments can go down as well as up and you may get back less than you originally invested. We don't offer advice, so it's important you understand the risks, if you're unsure please consult a suitably qualified financial adviser. Tax treatment depends on your individual circumstances and rules may change. Past performance is not a guide to future performance and some investments need to be held for the long term.