The contrast with a year ago could hardly be bigger. Apple’s first quarter results for 2018-19 followed on from a January profit warning and showed the first year-on-year drop in earnings per share for ten quarters. The results for the first three months of 2019-20 show the first revenue growth from the iPhone in five quarters, renewed sales and earnings momentum across the company as a whole and feature guidance for the second quarter which implies an upgrade to consensus earnings per share forecasts of around 4%.

This will all serve to reassure investors that Apple has rediscovered the sweet spot when it comes to iPhone pricing, functionality and driving the customer upgrade cycle thanks to last September’s iPhone 11 release.

Looking at it purely in share price terms, the iPhone 11 has had the biggest positive impact of any launches of the device since the very first version back in 2007.

It will now be interesting to see how Apple’s shares respond. They rose by some 2% in the after-market. It is possible to argue that the positive earnings surprise for Q1 when EPS came in at $4.99 against a consensus number of $4.51, and the upgrade for Q2 is the very minimum required after the phenomenal share price surge of the past 12 months.

The shares are up 105% over the past 12 months and for Apple to repeat that feat between now and late January 2021 the firm would need to add $1.45 trillion in market cap.

It’s pretty hard to see how even the Californian giant could generate the sort of earnings growth or cash returns that could spark such an increase in market cap – but then it added nearly $600 billion in market cap in 2019, so if the Fed lets liquidity run riot and markets really start to melt-up then anything might be possible.

But barring a full-on bubble episode, the forecast earnings growth does not look fast enough to fuel a repeat performance.

Fans of the stock will still argue that there is scope for upside, not least because the company is still a cash machine. Cash flow from operations in the three months to the end of December exceeded $30 billion for the first time in seventeen quarters. 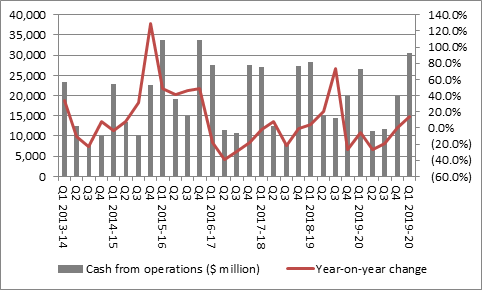 That enabled Apple to fund further cash returns to investors. Share buybacks and dividends came to $24.2 billion in the quarter to take the total handed back to shareholders to $398 billion since September 2013 - a sum greater than the market capitalisation of 492 out of the S&P 500 index’s members. 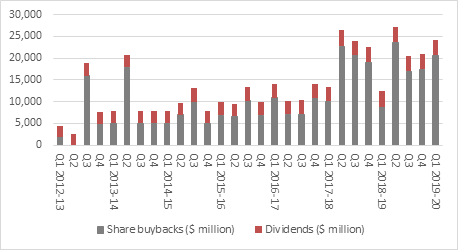 The combination of forecast upgrades (pleasing momentum-seekers) and cash returns (for income-hunters) could give Apple’s shares a further lift, although the ever-growing market cap will make it hard for the company to match past returns, simply owing to the law of large numbers.

In addition, bears will still find a few morsels upon which to chew in the first-quarter results, since arguing about valuation alone does not seem to be getting them very far, given the meteoric rise in Apple’s shares, even if they are now clearly more expensive, trading on a forward price/earnings (PE) ratio in the mid-20s compared to a multiple in the low teens a year ago.

On the basis of the past 12 months, such concerns may not be enough to stop Apple’s share price momentum but there could be three potential dangers that investors need to consider.

But a cyclical economic recovery, especially one accompanied by a marked uptick in inflation, would mean that earnings growth became less rare and investors would therefore have less reason to pay a fat multiple for it. That would leave Apple’s mid-20s forward PE rating potentially exposed, or mean it could at least act as a cap on the upside, if value names and cyclicals were to become the new focus of investors’ attentions.

END_OF_DOCUMENT_TOKEN_TO_BE_REPLACED
The value of your investments can go down as well as up and you may get back less than you originally invested. We don't offer advice, so it's important you understand the risks, if you're unsure please consult a suitably qualified financial adviser. Tax treatment depends on your individual circumstances and rules may change. Past performance is not a guide to future performance and some investments need to be held for the long term.