And he’s gone. Nine months after the Competition and Markets Authority blocked the proposed merger between Sainsbury and Asda, Mike Coupe, boss of Sainsbury and architect of the deal, has announced his intention to step down in June. At least the share price is showing him the courtesy of going down on the news, even if strategic and operational question marks still hang over the company after his near six-year tenure.

Sainsbury has been the worst performer of the major quoted grocery firms in the UK during Mr Coupe’s time as CEO, which began on 9 July 2014.

This may well reflect how Sainsbury’s profits (on a stated and adjusted basis) are lower than when Mr Coupe took over. He also oversaw two dividend cuts, even if the distribution had already been reduced in the year before he took over and last year Sainsbury managed its first increase in its annual dividend since the year to March 2013. 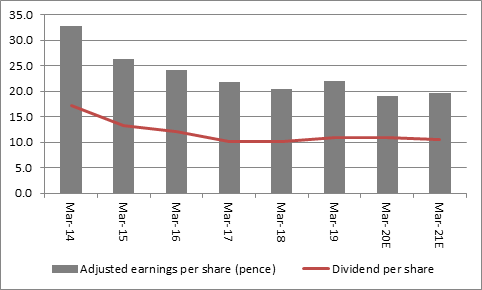 As such it is not clear whether Mr Coupe has been able to truly turn around Sainsbury’s fortunes in the face of the onslaught from online rivals and the discounters, despite a ferocious pace of activity, which included the acquisition of Argos, the dissolution of the inherited partnership with Netto and the failed Asda plan.

Since July 2014, Sainsbury’s market share has dropped from 16.6% to 16.0%, while that combined slice of the pie owned by Aldi and Lidl has surged to 13.7% from 8.4%. However, supporters of Mr Coupe will point out that Sainsbury lost less share than Tesco (2.7 percentage points), Asda (2.2 points) and Morrisons (0.7 points), adding that his charge overtook Asda for the number two slot in the process. 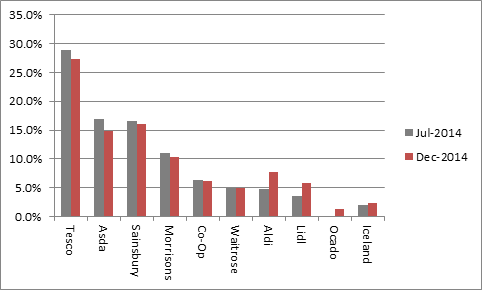 It is also fair to say that Mr Coupe had an easy job and it seems unlikely that his successor Simon Roberts will be able to lay his hands on any quick fixes. The UK grocery market is mature and highly competitive, so growth of any kind is going to be hard to come by.

After a brief renaissance and period of like-for-like sales growth in 2018 and early 2019, momentum has ebbed again and the most recent comparisons have been negative. 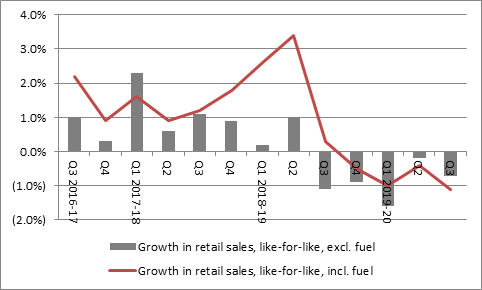 Mr Roberts’ is currently the retail and operations director at Sainsbury and it may be that he place his focus on getting the best out of the existing assets by staunchly defending market share through investment in IT, supply chain management and meeting customers’ changing requirements when it comes to the sourcing and packaging of products, as well as their price points.

Sainsbury’s shares trade at a valuation discount to Tesco and Morrisons on an earnings basis and a premium on a dividend yield basis. This suggests that investors are not entirely sure about the strategic legacy that Mr Roberts is inheriting, especially as investors appear to be demanding a higher yield to compensate themselves for the perception that there are greater risks associated with the stock, and perhaps a period of calm on the corporate structure and focus on the day-to-day performance of the core business is what they are after.

END_OF_DOCUMENT_TOKEN_TO_BE_REPLACED
The value of your investments can go down as well as up and you may get back less than you originally invested. We don't offer advice, so it's important you understand the risks, if you're unsure please consult a suitably qualified financial adviser. Tax treatment depends on your individual circumstances and rules may change. Past performance is not a guide to future performance and some investments need to be held for the long term.