“And so, after Vodafone, Marks & Spencer, Royal Mail and Centrica, another dividend yield that looked ‘too good to be true’ turns out to be just that, after Card Factory’s admission that it will not pay a special dividend in 2020,” says Russ Mould, AJ Bell Investment Director.

“This has torn a huge hole in the share price as chief executive Karen Hubbard’s forecast of a third straight drop in the company’s preferred measure of profit (adjusted EBITDA, which itself prettifies the numbers), may be prompting some investors to worry whether the ordinary dividend will come under pressure at some stage.

“Before yesterday’s Christmas trading update, which featured profit warnings for this trading year and the next one as well as a share price plunge, analysts had been expecting a total dividend of 14.3p on a share price of 140p, for a yield of more than 10%.

“With cash in the bank yielding nearly nothing and the UK 10-year Government bond, or Gilt, yielding 0.80% that may have looked like picking up money in the street to some investors.

“However, Card Factory has now decided that it will not offer a special dividend in 2020, after payments of 5p a share in 2018 and 2019 and 15p a share in the three years before that. 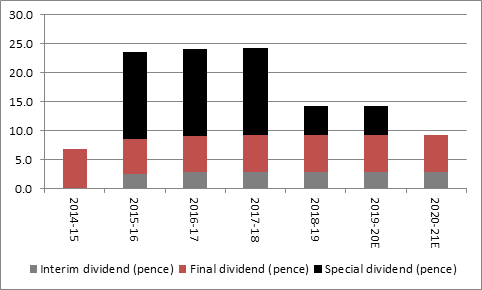 “This is because weak High Street footfall, a weak pound (which increases imported raw material costs) and rising staff wages mean adjusted earnings before interest taxes depreciation and amortisation (adjusted EBITDA) is expected to drop to £81 million to £83 million and then be saddled with £5 million to £10 million of extra costs in the fiscal year to January 2021. 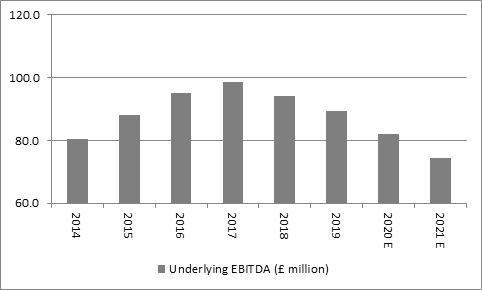 “The injury suffered to hopes for income has been accompanied by the insult of a share price collapse, to again warn investors against the danger of over-reaching for yield – there are few worse investments than an income stock that cuts its dividend.

“Shareholders must now decide whether to tough it out or cut their losses. An unchanged ordinary dividend of 9.3p a share still leaves Card Factory on a dividend yield of 8.4%.

“But the prospect of a third straight drop in annual profits will surely start to beg the question of whether even the ordinary dividend is sustainable over the long term.

“Management will argue that the Wakefield firm continues to provide value to customers by selling affordable greetings cards, wrapping and gifts to its customers, developing online channels through its cardfactory.co.uk and gettingpersonal.co.uk websites.

“Sceptics will argue that the simple art of remembering someone’s special day with a posted card or even a gift-wrapped present could be forgotten in the event of an economic downturn, or as a result of the rise of digital communication, with the result that profits will be gradually eroded, to the possible eventual detriment of that 9.3p a share distribution.

“For the moment, the numbers stack up (just about).

“Assuming an earnings per share figure of 16.5p for the year to January 2020, forecast earnings cover for the ordinary dividend is 1.8 times, only fractionally below the 2.0 level which provides additional comfort. However, that does dip to 1.6 times if earnings per share drops by say 10% in fiscal 2021 so the comfort zone is slowly being eroded.

“Net debt as of January 2019 was manageable at £144 million as this represented only 60% of shareholders’ funds, or equity. Card Factory is not unduly leveraged but however that the company does have £168 million in lease commitments, which take cash out of the business over time. If you include these in net debt then the figure is a little less comfortable at £308 million but interest cover is still good at around 20 times.

“A more detailed analysis of the company’s cash flow also suggests that an unchanged ordinary dividend of 9.3p a share is within Card Company’s compass providing profits do not come under sustained long-term pressure

“But the creeping sequence of profit warnings and declines in full-year profits will stoke concerns that earnings are under secular pressure and that is why investors are demanding such a high dividend yield from the stock, to compensate themselves for the considerable risk associated with owning the paper.”

END_OF_DOCUMENT_TOKEN_TO_BE_REPLACED
The value of your investments can go down as well as up and you may get back less than you originally invested. We don't offer advice, so it's important you understand the risks, if you're unsure please consult a suitably qualified financial adviser. Tax treatment depends on your individual circumstances and rules may change. Past performance is not a guide to future performance and some investments need to be held for the long term.