This is already the longest-running US equity bull market in history and investors will be looking to the upcoming fourth-quarter reporting season for clues as to what 2020 may bring, especially as a further 8% advance from the S&P 500 would make this the biggest bull market of all, in terms of capital gains.

The latest round of American results kicks off in earnest with the banks, JP Morgan Chase, Citigroup and Wells Fargo on Tuesday 14th and the consensus is looking for a marked acceleration in earnings growth. According to research from Standard & Poors, fourth-quarter operating earnings per share are expected to rise by 14% year-on-year, a big step up from the low-single digit percentage drop seen in Q3. 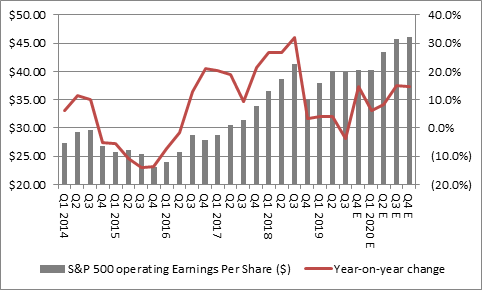 This is partly due to the base effect of the December 2017 tax cuts dropping out, while big jumps in profits from the financial services, health care and tech sectors are seen outweighing a slump at energy.

Strong earnings momentum is one key part of the investment case for US equities, thanks in part to its powerful technology sector, while a solid economy and accommodative Federal Reserve policy are others.

Bears will counter by growling about the US equity market’s lofty valuation and how that leaves investors exposed to any earnings disappointment, especially as it can be argued that the American economy is not perhaps quite as robust as it seems.

The case for US equities

The US could be seen as a pretty safe place to put money, especially as Europe and the UK are wrestling with the implications of Brexit and the US economy looks stronger than most if not all of its G7 or Western counterparts.

The Atlanta Fed’s GDPNow service is forecasting an acceleration in US GDP growth to 2.3% on an annualised basis in Q4 2019. For 2020 and 2021, the International Monetary Fund expects GDP growth of 2.4% and then 2.1%, compared to the overall growth rate of 1.7% expected across advanced economies in each of those two years. 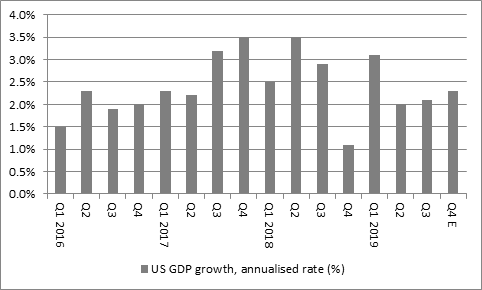 Inflation is benign, central bank policy remains accommodative and plunging bond yields could yet be persuading investors to favour equities over cash and fixed-income. At the time of writing the dividend yield on the S&P 500 index, at around 2%, exceeds the yield available from the US 10-year Treasury bond, and over $ 1 trillion in share buybacks will take the total cash yield on US equities to 5%, according to Standard & Poor’s research. Nor does the Fed seem in a hurry to raise interest rates, given its apparent plan to leave interest rates on hold at 1.75% this year, while the US central bank is still pumping liquidity into markets, thanks to its intervention on the overnight bank funding, or repo, market. This can be seen in how the Fed’s balance sheet is expanding rapidly once more, ending the Yellen-led initiative to shrink it and sterilise Quantitative Easing. 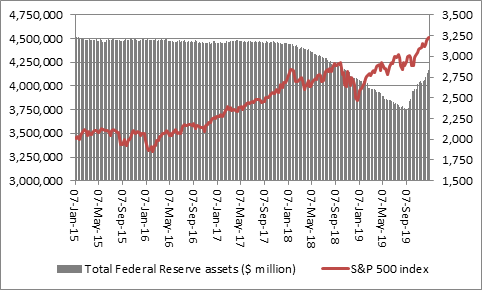 Analysts’ forecasts remain bullish on corporate earnings growth. After the slowdown in late 2018 and early 2019, caused by the base effect that related to the corporation tax cuts unleashed in late 2017, consensus is looking for a reacceleration in momentum. Work from Standard & Poor’s suggests that aggregate earnings across the S&P 500 index will rise by 7% in 2019, after a tax-cut-fuelled gain of 21% last year, and then advance by a further 12% in 2020. 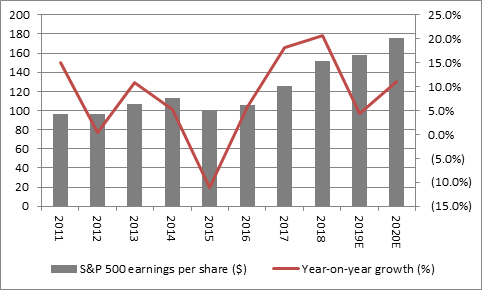 The case against US equities

The biggest knock on the US stock market is that it has already done incredibly well in the last ten years. Share prices have moved a lot faster than profits in the past year or two – the S&P 500 rose by 29% in dollar terms in 2019 even though corporate profits rose by just 7%. That re-rating gives bears the chance to argue that US equities are expensive, especially as Professor Robert Shiller’s cyclically-adjusted price earnings (CAPE) ratio puts the S&P 500 on a multiple of 30.9 times. That rating has only been exceeded twice for any period of time, in the late 1920s and the late 1990s, and neither of those episodes ended too well. 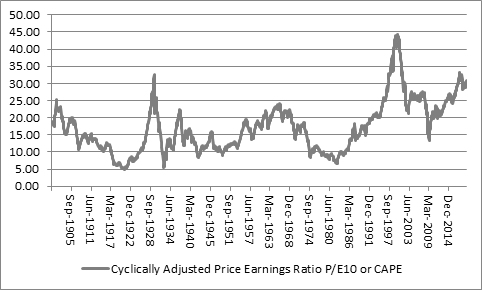 Valuation concerns could become more pressing if the US economy disappoints. The AtlantaFed GDPNow forecast calls for an acceleration in momentum in Q4 but the NYFed Nowcast expects the opposite, with a slowdown to 1.2% from 2.1% in Q3, and it possible to argue that the outlook in America is not as clear as it seems: 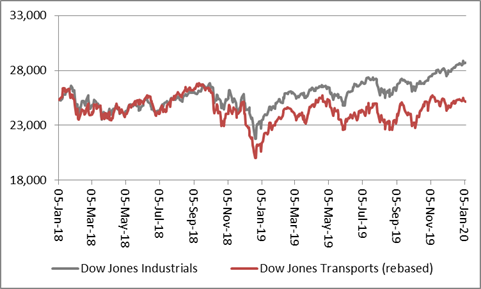 If the US economy does disappoint then that will not help companies meet expectations when it comes to that forecast of 11% earnings growth in 2020 and leave valuations exposed on the downside. As it is, US corporate profits have barely advanced since 2012 on an underlying basis, with massive share buyback programmes engineering increases in earnings per share. As such, investors could unwittingly find themselves paying top dollar for low quality profit increases. 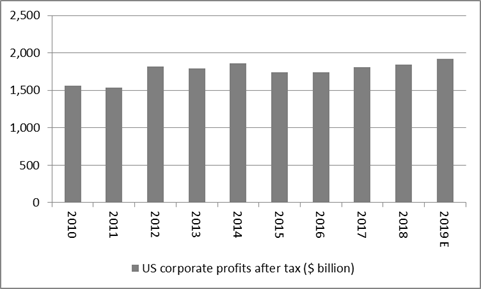 In Q4 2018 it looked as if bears were getting the upper hand but another huge upward run in 2019 gave the advantage back to the bulls. As 2020 begins, investors seem reluctant to fight the Fed and willing to buy on the back of hopes for a trade deal between the US and China and how both monetary policy and such an agreement could boost earnings, dividends and buybacks.

But the focus on hope rather than valuation or fundamentals is a potential red flag. At the very least, it suggests we are in the third and final phase of what Robert Rhea described as a classical bull market when he argued: ‘The first is represented by reviving confidence in the future of business; the second is the response of stock prices to the known improvement in corporate earnings and the third is the period when speculation is rampant – a period when stocks are advanced on hopes and expectations.’

The tricky bit is fathoming out how long the final excess, or speculative, phase can last and if history is any guide the answer is longer than anyone dare imagine – although the longer the party lasts, the worse the subsequent hangover is likely to be.

END_OF_DOCUMENT_TOKEN_TO_BE_REPLACED
The value of your investments can go down as well as up and you may get back less than you originally invested. We don't offer advice, so it's important you understand the risks, if you're unsure please consult a suitably qualified financial adviser. Tax treatment depends on your individual circumstances and rules may change. Past performance is not a guide to future performance and some investments need to be held for the long term.