“As the share price surged from 330p to reach 600p in early 2014 questions were asked in the House of Commons as to whether the Government had short-changed the taxpayer. It now looks as if long-term holders of the stock – who will include Royal Mail employees – are getting the worst of the transaction.

“The interim results statement itself does not read too badly, as UK revenues rose 1.8% year-on-year and management stuck to its guidance for (adjusted) operating profit of between £300 million and £340 million for the year to March 2020, compared to £509 million in the prior year.

“However, chief executive Rico Back’s outlook for the year to March 2021 has sent investors running for cover faster that a postman chased by an angry dog.

“Citing a sluggish UK economy and wider business uncertainty Mr Back now expects letter volumes to drop by 6% to 8% (after a 7-9% drop in 2019-20). This weaker outlook is compounded by his concern that Royal Mail’s productivity programmes are behind schedule, resulting in the profit-crushing combination of lower revenues and higher costs.

“As a result, Royal Mail now suggests that its UK operations will be no better than break-even in 2021. That is a big blow, as the UK generated £75 million of the £165 million interim adjusted operating profit (and £332 million of the £509 million recorded in the year to March 2019). 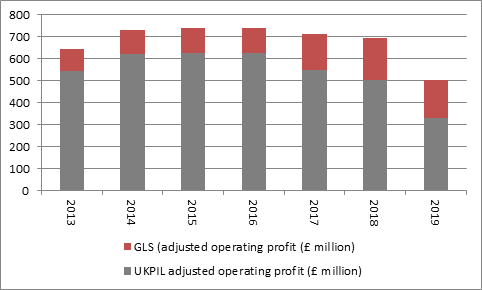 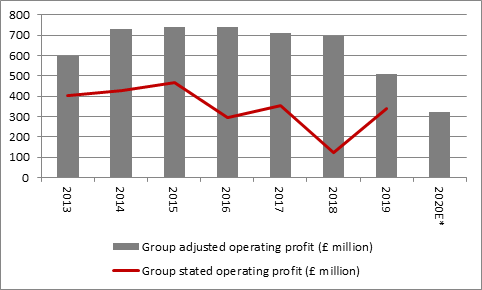 “That leaves the company with no chance of meeting the consensus forecast for 2021, which currently pencils in a small improvement in profits and earnings per share, despite ongoing good performing from the General Logistics Systems operation.

“The profit warning could also put the dividend back in jeopardy. Analysts are already looking for a cut to 15p a share from 25p for the year to March 2020 and a further erosion of profits may pressure that, too. 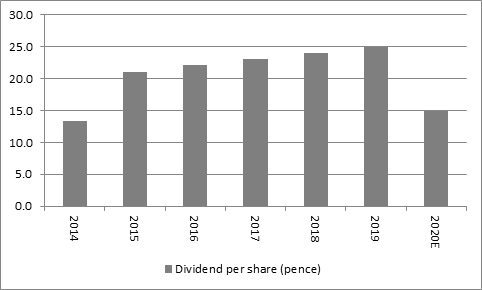 “Even before the forecast profit declines for the years to March 2020 and March 2021, free cash flow did not cover the dividend payment – which with 1 billion shares in issue will equate to £150 million, if the consensus forecast of 15p per share is met.

“With operating profit now under further pressure, Mr Back and his colleagues will have to work hard to sweat working capital within the business if they are to avoid borrowing to fund the payment or cut it again, unless the cash cost of transformation expenses or capital investment drop sharply- and the latter looks particularly unlikely.

“Investors’ initial enthusiasm for Royal Mail centred on its yield, as the firm offered a notional 20p-a-share dividend in its first year as a public company (based on the final payment of 13.3p), enough for a meaty 6% yield on the 330p flotation price.

“That stood out like a beacon at a time of meagre returns on cash and low bond yields, although bears immediately asked the question of whether the payments could be sustained, as the world turned to digital and more immediate forms of communication and the threat of industrial unrest lurked in the background.

“It is possible that Mr Back is painting the situation as black as possible in an attempt to rein in union demands at a time when the Union of Communication Workers is again looking to strike over issues of job security, pay, pensions and corporate culture.

“An industrial dispute over the key Christmas period has been averted, thanks to a High Court ruling over the nature of the strike ballot, but industrial action in the New Year remains a distinct possibility.”

Royal Mail said parcel deliveries jumped as households ordered online during Covid-19 lockdowns, though the rise was offset by a continuing deterioration in letter volumes....

Postal and logistics group Royal Mail has been fined £1.6m by British regulators for failing to meet its delivery targets and overcharging customers for stamps....

END_OF_DOCUMENT_TOKEN_TO_BE_REPLACED
The value of your investments can go down as well as up and you may get back less than you originally invested. We don't offer advice, so it's important you understand the risks, if you're unsure please consult a suitably qualified financial adviser. Tax treatment depends on your individual circumstances and rules may change. Past performance is not a guide to future performance and some investments need to be held for the long term.