Netflix results soothe some but not all of investors’ concerns

Netflix results soothe some but not all of investors’ concerns

“Netflix’s third-quarter earnings per share figure of $1.47 absolutely demolished the consensus analysts’ forecast of $1.05, as sales grew by 31% year-on-year, operating profit doubled and net income rose by 65%. The addition of 6.8 million net new subscribers also represented a big recovery from the weak second quarter figure and as a result the shares rose strongly in the US after-market,” says Russ Mould, AJ Bell Investment Director.

“However, Netflix is unlikely to have done enough to convince the doubters that its $125 billion market cap can be justified: subscriber additions do seem to be slowing, the profit and loss account benefited from a reduction in marketing spending and certain one-off financial items, while cash flow remained resolutely negative.

“To accentuate the positive, sales, operating profit and net profit all rose sharply and reached new-all time high levels for the company, at $5.2 billion, $980 million and $665 million respectively. Chief executive Reed Hastings also forecast 30% sales growth for Q4 and stuck to a forecast of a 13% operating margin for 2019 as a whole, allowing for possibility of foreign exchange movements, and 16% in 2020. 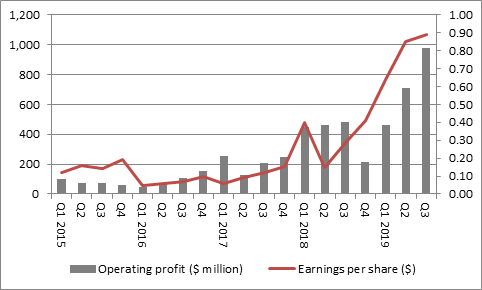 “Such jet-propelled growth, fired by fresh subscriber additions (including a budgeted 7.6 million in Q4) and a planned 9% increase in average revenue per user in the final three months of the year, is why investors own the stock – earnings momentum.

“Yet bears may not be entirely convinced. They will growl about a slowdown in net subscriber additions, even before rival streaming services from Disney and Apple join the fray – and Mr Hastings does acknowledge competition, alongside some customer defections owing to price increases and the timing on new content releases, as a reason why Netflix now expects to add 26.7 million subscribers in 2019, down from 28.6 million in 2018. 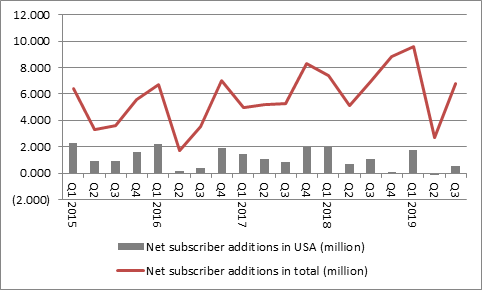 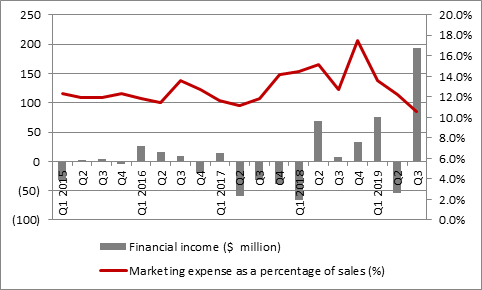 “This raises some questions over the quality of Netflix’s earnings surprise and sceptics will continue to point to the firm’s voracious cash consumption. Netflix is still failing to turn profits into cash, although the rate of cash burn is at least easing. 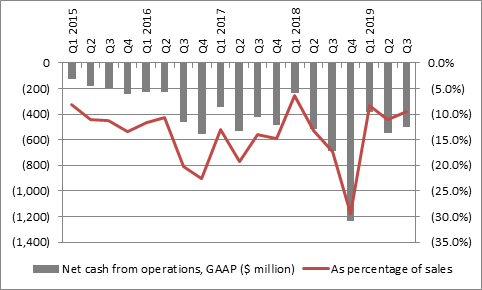 “This may not be an issue now, with the share price relatively buoyant (it is still one-third below its 2018 all-time high) and access to debt markets proving no problem. But it could be one day if equity or fixed-income markets ever lose faith in the company’s business model and competitive position.

“Netflix has $8 billion in net debt on its balance sheet, with $19 billion of content purchase obligations and $2 billion in leases on top. These look like perfectly management commitments at the moment, at least so far as equity markets are concerned, but shareholders should bear in mind that Moody’s gives Netflix a credit rating of Ba3 and S&P rates its debt BB-, both scores which lie in sub-investment grade, or “junk” bond territory.

“Those multiples leave little or no margin for further disappointment when it comes to subscriber additions or profits and at some stage Netflix will need to start generating cash, even if its revenue and profit momentum continues to be very rapid.”

END_OF_DOCUMENT_TOKEN_TO_BE_REPLACED
The value of your investments can go down as well as up and you may get back less than you originally invested. We don't offer advice, so it's important you understand the risks, if you're unsure please consult a suitably qualified financial adviser. Tax treatment depends on your individual circumstances and rules may change. Past performance is not a guide to future performance and some investments need to be held for the long term.