When Kingfisher boss Véronique Laury steps down on 25 September she will become the tenth FTSE 100 CEO to do so this year, with five other already-announced changes at the top yet to become effective. In addition, her departure, as she is replaced by Thierry Garnier, will take the number of female FTSE 100 CEOs down to just five following on from Direct Line’s demotion from the index in the latest reshuffle under the recently-appointed Penny James.

Unfortunately Ms. Laury is not leaving on a high note, either. The shares are down by a third since she took over in December 2014, during which time the FTSE 100 is up by some 10% and the main reason for this is the failure of her five-year OneKingfisher plan to deliver the targeted cost, productivity and profit gains.

At least today’s interims do no worse than live down to the lowered expectations set by March’s profit warning, when Kingfisher acknowledged that gross margins would come in flat (excluding Russia and Iberia).

That prompted analysts to take their full-year adjusted pre-tax profits estimates down from £756 million to £630 million for this year – only a small uplift from last year’s £573 million.

A 4% increase in adjusted pre-tax profit at the first half stage to £337 million leaves Kingfisher with a chance of meeting that forecast, especially as management is leaving gross margin guidance unchanged. 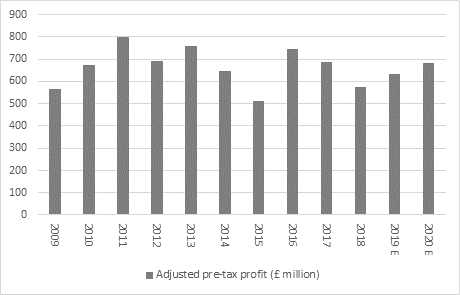 However, sales momentum still looks weak and that means there could be further pressure on forecasts. 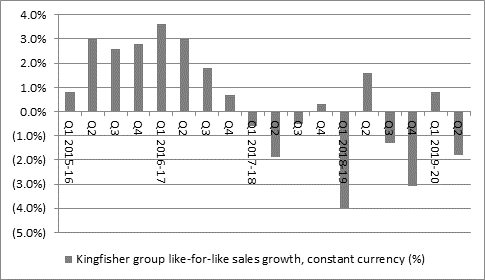 Screwfix, Poland and Romania are doing well but analysts and shareholders alike will be frustrated to see weak performances from B&Q in the UK and Castorama in France. No-one is pretending that the trading environment is helpful, but it will irritate investors that Kingfisher cites disruption caused by new ranges and implementation issues relating to the OneKingfisher plan as additional reasons for poor sales showings at B&Q and Castorama respectively, some three years after the launch of the plan to unify and simplify product ranges. 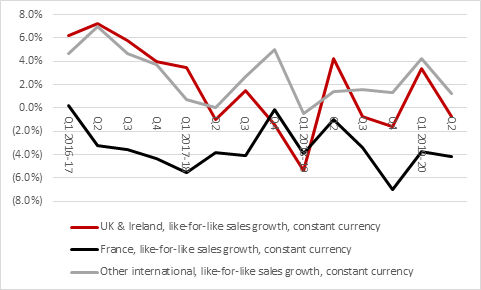 Some investors may look to the dividend for some succour, as the yield on the shares is around 5.4%.

One thing that did go according to plan under the OneKingfisher scheme was the completion of a £600 million, three-year share buyback plan (not that it did the share price much good).

In addition, Kingfisher did leave last year’s dividend unchanged at 10.82p (even if that ended a nine-year streak of gains) and it has also maintained this year’s interim payment at 3.33p per share. That suggests the full-year payment could be held again at 10.82p, as earnings cover hovers near the 2.0 times threshold, although any further earnings forecast downgrades could start analysts to wonder whether that payment is truly sustainable. They will remember how long dividend growth streaks came at an end at FTSE 100 stalwarts Tesco and Pearson with an initial move to merely hold the payment unchanged before the pressure on earnings simply became too great and cuts followed. It remains to be seen whether Kingfisher comes to regret doling out that £600 million buyback rather than holding on to the cash. 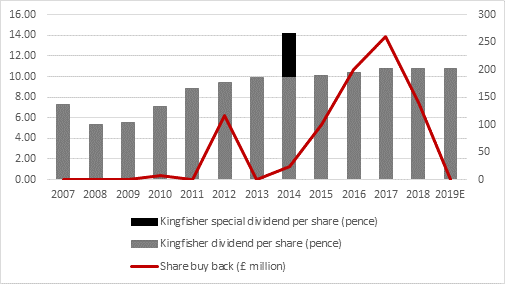 Ms Laury’s departure will take the number of female FTSE 100 chief executives down to just five, following on from Direct Line’s demotion from the index in the latest reshuffle under the recently-appointed Penny James.

Those still in position are:

Ms Laury took over at Kingfisher in December 2014 so her tenure lasted 4.8 years, just under the 5.5-year average of the FTSE 100 as a whole.

Five people who should consider using an ISA

Hammerson takes the axe to its dividend, and Hotel Chocolat is looking sweet

Market waking up to coronavirus impact

END_OF_DOCUMENT_TOKEN_TO_BE_REPLACED
The value of your investments can go down as well as up and you may get back less than you originally invested. We don't offer advice, so it's important you understand the risks, if you're unsure please consult a suitably qualified financial adviser. Tax treatment depends on your individual circumstances and rules may change. Past performance is not a guide to future performance and some investments need to be held for the long term.