At least HSBC’s share price has been courteous enough not to go up on the departure of its CEO but this is likely to be of little particular comfort to John Flint, who becomes the fourteenth FTSE 100 boss to leave or announce plans to leave their post (with four of the group set to depart in 2020).

What may grate with Mr Flint is that he had the second-shortest tenure of the ten bosses set to leave this year, so he has hardly had chance to make his mark. We may never find out the reason why, but the poor first-half performances from HSBC’s US and European operations, and the abandonment of a 2020 profitability target for the American arm, are one possible explanation.

Source: Company accounts. *Veronique Laury’s exact departure date in autumn yet to be announced so term calculated to today, 5 August.

Of Mr Flint’s immediate predecessors, Stuart Gulliver completed seven years in the job, Michael Geoghegan five, Stephen Green nearly three and Keith Whitson over 5 years so the bank does not appear to be in the habit of chopping and changing too much – which makes this seem all the odder, as Mr Flint was a HSBC career man.

Perhaps new chairman Mark Tucker is looking for a ‘new broom’ approach after last year’s settlement with US regulators and uninspiring performance in both America and Europe, which made just $226 million between them in the first half, compared to $1.7 billion in Middle East, $665 million from Latin America and $9.8 billion from the powerhouse Asian unit.

Overall, HSBC’s first-half numbers seem solid enough, despite the poor showing in the US and Europe and an 18% drop in pre-tax income from the investment bank to $2.8 billion. Stated pre-tax profit rose to $12.4bn from $10.7bn a year ago pre-tax, the dividend was unchanged and HSBC announced an extra $1 billion buyback (although the merits of this can be debated, with the shares still trading slightly above their net asset, or book, value).

However, there are two areas of concern, although they are not unique to HSBC and cannot be laid directly at the door of Mr Flint.

The first is pressure on net interest margins. This measures how profitable HSBC’s loan book is, as HSBC borrows money in the short term (or attracts deposits) at one interest rate and then loans the cash out at a higher interest rate over the long term. The problem now is that as central banks look to cut headline rates, the yield curve is flattening and the gap between short and long-term rates is narrowing. That squeezes the banks’ net interest margin and hurts profits and HSBC is feeling that squeeze. Its net interest margin fell to 1.61% from 1.66% a year ago 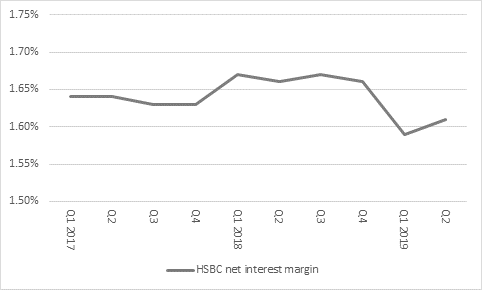 The second is a jump in credit losses and loan impairments to $1.1 billion against $357 million in the first half a year ago.

This looks to be the single most powerful theme of the interims season from the Big Five FTSE 100 banks. RBS, Barclays and Lloyds showed a similar trend to suggest that we may have passed the bottom for the loan loss cycle and that only way is up from here (albeit thankfully from what is still a low base). 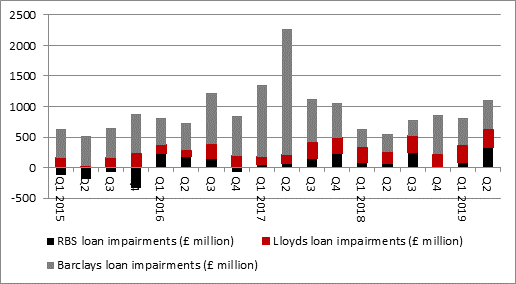 Standard Chartered did not see an increase but HSBC did and between them it looks like credit losses and loan impairments troughed about a year ago. A serial increase could start to weigh upon headline profits at some stage. 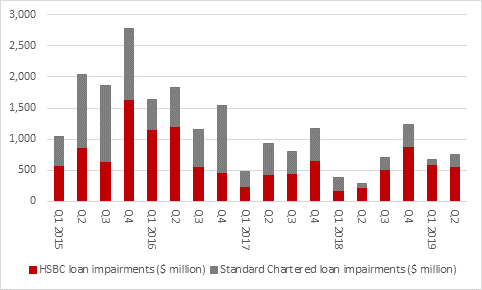 That in turn may explain why the banks still look cheap on the basis of book value, as investors seem to be wary of the quality of their loan portfolios and thus their assets.

FTSE back below 7,500 as virus fears grow, and major Amigo shareholder wants out

END_OF_DOCUMENT_TOKEN_TO_BE_REPLACED
The value of your investments can go down as well as up and you may get back less than you originally invested. We don't offer advice, so it's important you understand the risks, if you're unsure please consult a suitably qualified financial adviser. Tax treatment depends on your individual circumstances and rules may change. Past performance is not a guide to future performance and some investments need to be held for the long term.