Global stock markets are welcoming the encouraging noises over trade, tariffs and relations between America and China after the G20 meeting in Japan and even if it is not entirely clear what tangible progress is being made in those negotiations the latest manufacturing purchasing managers’ indices (PMIs) around the world show why investors are so keen for the talks to deliver.

All three of Asia’s export powerhouses – South Korea, Taiwan and China – offered readings below 50, a result which is usually indicative of slowing activity or even an economic downturn or recession. All three scores weakened month-on-month and the trend still looks to be resolutely downward, based on the readings of past year. 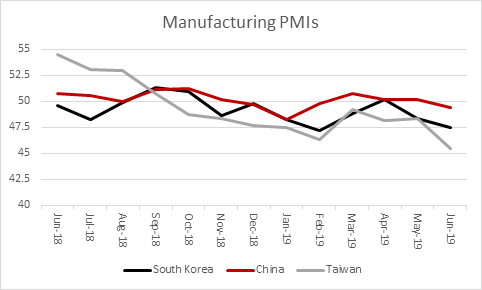 South Korea’s latest export numbers also look dreadful, with a 13.5% year-on-year fall, and Japan also seems to be feeling the pinch from a slowdown in global trade and economic activity. The Bank of Japan’s latest Tankan survey for large manufacturers showed a score of just seven, down from 12 in April, and that is the lowest level since 2016. In addition, Japan’s latest manufacturing PMI slipped a little and came in below 50 for the fourth month in a row. 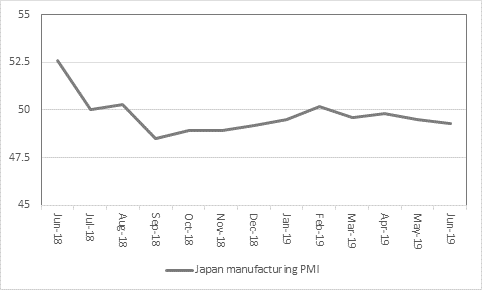 If there is any good news to be had, it may be coming from an unlikely source in Europe. Sweden and Germany’s manufacturing PMIs showed improvement, with Sweden holding above 50, according to the Swedbank survey. Both Sweden and Germany are heavily export drive with strong exposure to industrial goods and especially the car industry, which remains firmly in President Trump’s firing line, even if he is holding off for now on the imposition of fresh tariffs on American auto imports.

The UK, however, has dipped again from 49.4 to 48, a figure which undershoots even the 48.2 mark reached in July 2016, amid the initial shock caused by the vote of the EU referendum. Whether this is down to ongoing confusion of what Brexit may or may not mean, and when it may or may not happen, or industry-specific issues relating to say the steel or auto businesses, is harder to divine but for the moment British manufacturers seem to be down in the mouth. 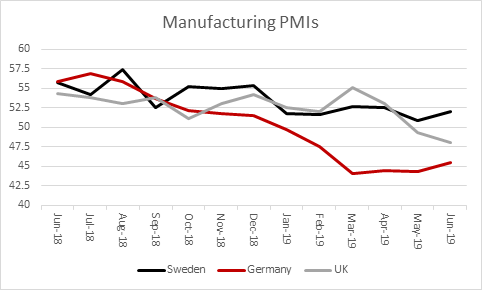 This all sets the scene for the latest American manufacturing PMI from the Institute of Supply Management, due out on Monday afternoon. The trend here has also been resolutely lower for a year. Whether this is down to nothing more than the economic upturn’s old age, given that it is now 10 years since the Great Financial Crisis, continued growth in the world’s debt pile or the effect of trade spats between America and a wide range of trading partners is open to debate. 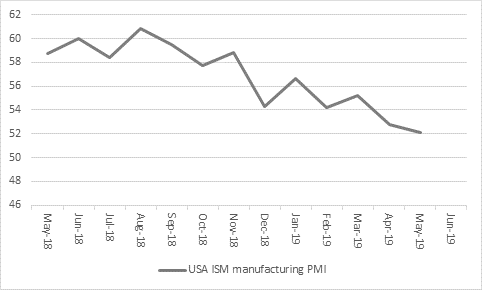 But the imposition of tariffs on goods going into America, retaliation from China and worries that we will see a repeat of the damage done to world trade flows by America’s Smoot-Hawley Act of 1930, has weighed on sentiment toward global equities for well over a year, so investors are understandably hoping that the G20 meeting in Osaka will lead to an agreement between Washington and Beijing.

The problem here is that talk and tweets are cheap. Ultimately it is action that counts and there are few signs of real progress toward an agreement since the G20 meeting in Buenos Aires last November.

America appears to be giving some ground by permitting its companies to trade with Huawei again and China appears to be offering an olive branch through increased purchases of US agricultural supplies. But there is no firm time line for talks or a conclusion and no indication of an imminent meeting on minds on the issues of trade and tariffs, intellectual property or technological supremacy so perhaps investors should be careful not to get their hopes up too quickly.

END_OF_DOCUMENT_TOKEN_TO_BE_REPLACED
The value of your investments can go down as well as up and you may get back less than you originally invested. We don't offer advice, so it's important you understand the risks, if you're unsure please consult a suitably qualified financial adviser. Tax treatment depends on your individual circumstances and rules may change. Past performance is not a guide to future performance and some investments need to be held for the long term.