Royal Mail’s dividend cut shows that the former FTSE 100 member is finding life pretty tough in the digital age, as letter volumes keep declining faster than expected, and you could be forgiven that retailers of greetings cards would be in similarly dire straits. But Card Factory’s first-quarter trading update shows sales growth of 2.3% on a like-for-like basis and this is more than enough for chief executive Karen Hubbard to leave full-year forecasts unchanged. That will in turn fuel hopes for another special dividend from the Wakefield headquartered firm in a boost to income-seekers.

Dividend cuts at firms such as Vodafone, Royal Mail, Marks & Spencer and Renewi – all high-yielders on paper until the axe fell in reality – mean that many investors are getting hurt as they reach for yield in a low-interest rate world and portfolio builders may start to fight a little more shy of stocks which on the face of it offer a very plump yield.

If Card Factory matches last year’s 9.3p ordinary dividend and 5p special distribution that would make for a total of 14.3p a share. That equates to a 7.1% yield on a share price of 200p. 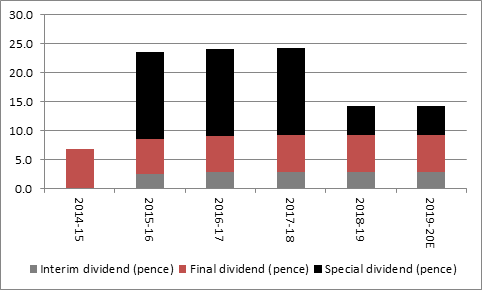 With UK 10-year Government bonds, or Gilts, yielding just 0.9% and the best cash ISAs barely 2% (if you are prepared to lock your cash away for five years) that 7.1% dividend yield may look tempting to those investors who are looking for income from their portfolios.

However, they must make sure that the ordinary dividend and special dividend can be paid by the company and funded in a way that does not compromise its long-term health – in other words from organic cash flow and not through taking or debt (and not through the short-term expedient of cutting capital investment either, as this will only weaken the business and its competitive position in the long term).

The good news is that Card Factory passes the initial scratch-and-sniff tests:

Forecast earnings cover for the ordinary dividend is 1.9 times, only fractionally below the 2.0 level which provides additional comfort. However, that does dip to 1.2 times if you assume another 5p-a-share special dividend will be paid.

Net debt is manageable at £144 million as this represents only 60% of shareholders’ funds, or equity, so Card Factory is not unduly leveraged. Note however that the company does have £168 million in lease commitments, which take cash out of the business over time, so if you include these in net debt then the figure is a little less comfortable at £308 million.

Additional reassurance can be gleaned from interest cover. Last year’s £71 million in operating profit already accounted for £43 million in lease payments on its store estate and even after that expense operating income covered interest payments by more than 24 times. Anything above 2.0 times is usually seen as offering a degree of comfort.

A more detailed analysis of the company’s cash flow also suggests that an unchanged ordinary dividend of 9.3p a share and a 5p-per-share special is within Card Factory’s compass – but that assumes management’s guidance that profits will come in broadly flat this year (using its preferred metric of earnings before interest, tax, depreciation and amortisation, or EBITDA), despite competition from electronic forms of communication and cost pressures such as the weaker pound, rents, rates and the minimum wage.

Source: Company accounts. 2020E based on consensus forecasts and management guidance given at full-year results in April

Here lies the rub. Sceptics will argue that the simple art of remembering someone’s special day with a posted card or even a gift-wrapped present could be forgotten in the event of an economic downturn, or as a result of the rise of online messaging, with the result that profits will be gradually eroded, to the possible eventual detriment of the dividend.

Shareholders will counter by saying that Card Factory continues to provide value and affordable greetings cards, wrapping and gifts to its customers, develop online channels through its cardfactory.co.uk and gettingpersonal.co.uk websites and control is costs, with the result that sales and profits will prove more resilient than expected. Operating profit has fallen two years in a row on a stated basis, but it is unchanged from five years ago and cash flow is if anything a little higher than it was in 2014, so that lends some credence to this argument, as does today’s solid first-quarter sales report.

Cineworld suffers from lack of major releases, and Pets at Home trading ahead of expectations

How to invest in structural change on a global level

END_OF_DOCUMENT_TOKEN_TO_BE_REPLACED
The value of your investments can go down as well as up and you may get back less than you originally invested. We don't offer advice, so it's important you understand the risks, if you're unsure please consult a suitably qualified financial adviser. Tax treatment depends on your individual circumstances and rules may change. Past performance is not a guide to future performance and some investments need to be held for the long term.